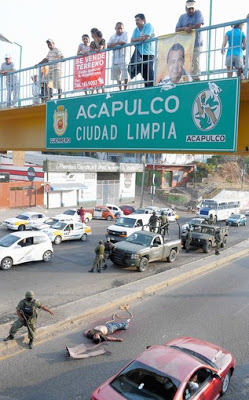 In this photo, the body of a man left hanging from a pedestrian
bridge until the rope slipped loose, lies on a street guarded by
the Mexican Army (AP photo) 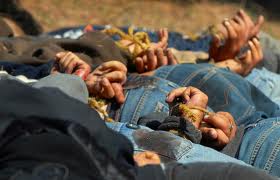 Violence in Acapulco isn’t much different from any other large city in Mexico, but because of the tourist trade and the spotlight shined on the parade of mayhem, it looks worse.
The official death toll for the last four years approaches 700 killed in Acapulco in the Cartel Wars. Experts put the number at roughly 6 times that number — because in Mexico, if the government doesn’t see a corpse, nobody died. Sleeping with the fish or a grave in a filled culvert – or having your flesh and bones dissolved in lime doesn’t count. Two weeks ago, thirty men were found slain around the city with fifteen of those beheaded. Two police officers were killed on Miguel Aleman Boulevard in the center of town last week, but usually they aren’t killed in the tourist zone.
There is the more-or-less gleaming tourist city of Acapulco (let’s call it a Potemkin Village) and then there’s the rest of the city, a squalid, dusty, poverty ridden ghetto with bad roads, bad water and that’s where most of the decapitated heads are displayed in all of their grizzly horror. 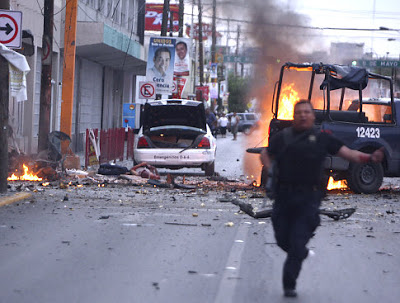 Improvised explosive devices are detonated
now, far more than ever before in Bloody Mexico.
It’s on the other side of America’s southern border.