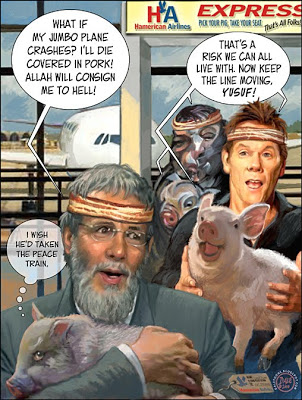 Dale (LINK) came up with an interesting solution to the problem and controversy caused by expanded searches at the airport. He suggests that each passenger should be accompanied by a pig. Muslims who wish to blow themselves and everyone else up on the aircraft would be splattered by pig blood and would go to hell. (no apologies to Cat Stevens) By adopting Dale’s plan we could satisfy the requirements of “diversity” which calls for Muslims to “pat themselves down for weapons” and declare whether or not they’re carrying one to TSA officials.
The larger question is one of “diversity” which creates protected classes of people who don’t have to go through –whatever– the same as everyone else does. Today Muslims seem to enjoy that protected class status under the rubric of diversity. Muslims are exempt from the odious requirements of ObamaCare that the rest of the nation was saddled with. The obvious question is “WHY?” and the answer is that we all need to learn to respect their protected status. Protected from what? Perhaps from infidels who are naturally less worthy, less clean, etc.? How does that interface with healthcare? I don’t know — but it does because the law sets them apart.
Many people in our society demand that sexual orientation be placed alongside race, color, religion, sex, and national origin, as a class eligible for various diversity programs, tracking initiatives, and complaint resolution processes. They wish to produce a sense, rightly or wrongly, that gay men and lesbians are being elevated to a special status as a “protected class” and will receive special treatment. The push for the military to repeal the practice of Don’t Ask Don’t Tell is at the heart of this issue.
The Diversity Industry in America has their own lobby in Washington DC and it’s a money making concern. There is a lot of lobbying money being thrown at the the Diversity band wagon. Everyone wants to be “protected and special”. Ok, I can agree with that. The problem with this is that we are ALL different – so why decide to protect one group over another. Mennonites may never fly, but if they did, would THEY be accorded the same modesty standards as Muslims? No, they don’t have a lobby in Washington DC and the homeland isn’t a crust of earth resting on a vast sea of crude oil.
The true standard of Diversity would be for everyone to be treated equally. But that is not the goal of “Diversity”.