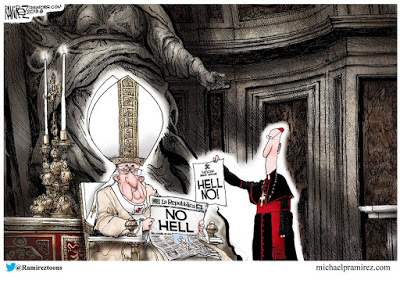 Yes or No?
The Pope now maintains that there is no Hell. So either the Catholic Church has been fibbing all of these years or the Pope is just a senile old communist. The only part about that which disturbs me is this: Where is it that I’ve been telling people to go all these years?
I’m not a Catholic so I’ll leave it to those of you who are to sort it out.
I’ve often maintained that the Devil is a woman based on scripture combined with personal observations. (“And Satan was a broad in the land”) Others claim that Satan manifest himself as Mohammed. It would be tough for me to argue against that position. But the Pope is uncommonly friendly with savage Mohammedans. It’s too confusing.
Meanwhile in Latin America
The dinner at Grandma’s house at Easter may be over but the hangovers are not. There are many ‘cures’. The best is not to get drunk in the first place.  There was the inevitable tortilla with a picture of Jesus on it, discovered at a bakery in Chihuahua. People flocked to the panaderia to worship the tortilla and while there, many of the faithful bought bread from the bakery that brought them the miracle tortilla. Swift was the business as the devoted came from miles away.
There are concerns about President Trump canceling NAFTA and driving the Mexican economy further into decline, but a few shots of tequila and a bite of lime took that issue and stuffed it into the sombrero to be examined at a later date (the day after it’s canceled).
And that’s how it rolls.