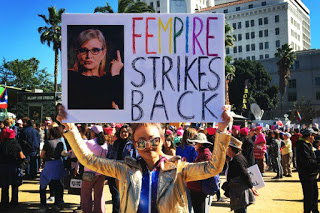 Facebook
Twitter
Pinterest
WhatsApp
Pink Hats
I avoid downtown Los Angeles like the plague, but must occasionally go there for this and that – and while I’m there, why not stop for BBQ prawns at the downtown Los Angeles Fisherman’s Outlet (worth the detour) at 529 S Central Ave, Los Angeles, CA. Yes, it’s a shameless plug but the BBQ prawns there are really excellent, and there’s the seedy downtown LA vibe with the security guards out in force guarding the diners seated on the outdoor patio…dystopian society at lunch.

While navigating streets under construction and other traffic, I happened on a small womyn’s march.

The signs were interesting, “This Pussy Grabs Back”, “Support Dreamers”, “Gays (heart) Vaginas”(there were two homosexual male partners), “Pink Lives Matter”, “Save the Whales”, and so forth. Naturally, traffic backed up to look at the freak show on the sidewalks. There were the usual suspects – chubby blue-haired slatterns and new age hippies joined ‘as one’, wearing pink hats mimicking private parts.
They chanted and screamed helplessly at the sky — and I thought to myself, Conan was right. It’s good to hear the lamentation of their women as your enemies are driven before you. The Progs are unhinged and their hoped for salvation: Russia-Russia-Russia, Stormy Daniels, and so forth have all flopped like a dying tuna on the deck of a garbage scow. Their message is – confused by identity politics. I spoke to a police officer while stopped in traffic and he said that there was a black womyn’s march permit for the next day. They’re apparently in a struggle with the ‘color pink’.
Even as the Democrat Party backstrokes to put as much distance between themselves and “Crooked” Hillary Clinton,  the womyn’s movement seems to want her to make another run at the White House. I thought to myself, “that’s a splendid idea.”