You should draw Mo wherever you go. Some people don’t have a talent for art. Try this simple suggestion:


If you draw a picture of Hillary, add a beard and a turban, you have Mohammed. It’s easy. You can even transform a campaign picture of your favorite female candidate into Mohammed. Bring a red sharpie for the eyes (right).
Is it politically correct to “magically” transform Hillary into the Prophet of Islam? I say that it is. Do you think that we should hold THOSE competitions? I think that they’d be interesting. Clearly more interesting than freehand sketches. Somebody call Pam Geller and tell her that you heard it here first.
I know that it’s not very progressive to believe that Muslims don’t have the right to murder non-Muslims who refuse to submit to sharia and islamic law, but come on. Don’t you think that they’re just a little thin skinned?
Muslims don’t find it wrong for adult men to “marry” (rape) prepubescent little girls, but they feel compelled to murder anyone who draws a cartoon of the Prophet Mohammed, though I don’t know if this applies to Hillary morphs. I haven’t heard an Imam’s opinion on the matter. 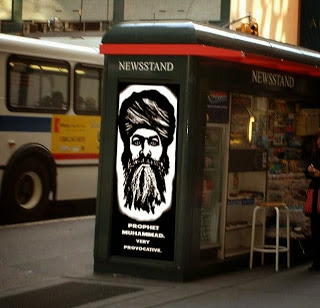 Americans are working to show their support for the Draw Hillary/Mo program by posting these pictures at different sites. Hillary is provocative, so was Mohammed. Has anyone ever seen both of them at the same party? Maybe THAT is why Bill prefers to seek the company of people other than Hillary?
Is there a hygiene difference between Mohammed and Hillary? I really don’t know. The time I met her when she was SECSTATE, it looked like her hair hadn’t been washed in a few days and her breath smelled like an old tent. The camel odor that some people associate with the ancient prophet was missing.