Does Life Exist? (Your Weekend Sermonette) 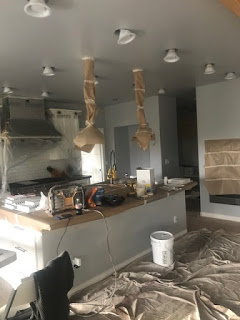 Some scientists have posited that the universe is a giant computer simulation. (here) They assert that it’s all a virtual mirage, which is, coincidentally, the name of this blog.

Then along comes Cosmos, disagreeing (here).

And will we be dead in 12 years do to either global warming or the new ice age (global cooling)? Does that mean that the simulation is ending?
That scientists have the time and funding to gather together, to discuss this might impress you. They get together to discuss a lot of drivel at scientific conferences, but this is serious stuff! It’s not just PhD’s working on the next thing to publish…really.
If this whole universe is nothing but a computer simulation, where is the computer? I realize that’s like asking how many angels can dance on the head of a pin.

At the White Wolf Mine (in the Arizona Highlands)

Meanwhile, in the middle of the simulation that we call life, I came home Friday to the hovel, and the ENTIRE pace was masked and draped (views of the kitchen and great room below). 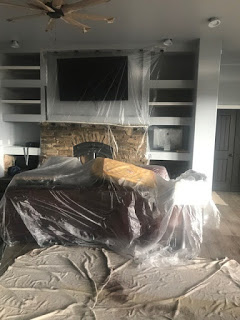 In order to go to bed, I had to pull back drop cloths and plastic and stuff. I called and asked, “can’t you do one room at a time?” Apparently not. The simulation sucks.
The good news was that the snow had almost completely melted. I like snow, and all, but am ready for Spring to spring into action here in on the Mogollon Rim. This is a time lapse of about fifteen minutes this morning: 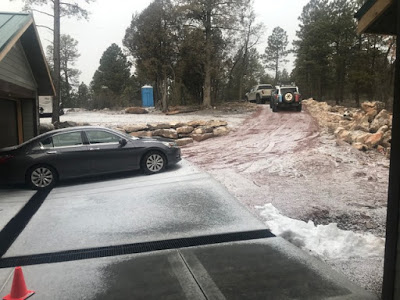 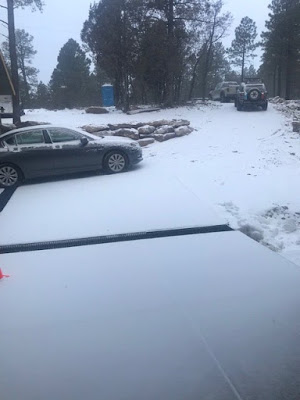 Yeah, whoever is doing the simulating is beginning to tick me off.
The black line in the concrete is a steel grate that serves as a drain and dumps moisture off, down the hill on the other side of the house. The driveway drain system is not complete. The snow has kept the work from being done – and I thought that… Never mind/vain hope/more snow is here. The photo makes it look like the drain goes up hill, and that’s just the way I held the phone.
Locals said that they had been praying for more snow. I need to get LSP into action, counter-praying for warm weather and global warming. My new philosophy is “give the progs the warmth they desire”. The coming ice age may dash the hopes, dreams and yearning of the Hollywood elite (our betters, who pretend to be actual people for a living).
I am leaving the White Wolf Mine to the painters, soon, for a week, so that they can complete their task, and I can generate income to pay for the continued construction. As you might have read (earlier post), the original painting company who did the primer coat, walked off the job and I went after his bond. These new guys seem diligent, even though it’s only a simulation of diligence. The simulated construction work here at the shack will continue for some time, I fear. The simulators could fix it and just make it done…but no.
If you ask yourself why part of the LL fleet of vehicles is not in the garage, it’s full of STUFF waiting to go into the house when the painting is complete. (simulated stuff)