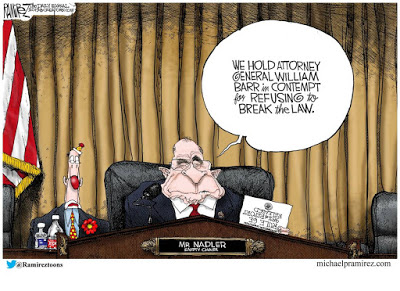 Facebook
Twitter
Pinterest
WhatsApp
By A Thread
The Constitution has hung by a thread for some years now. Stretched, that thread has come close to breaking at times.

I give President Trump huge credit for easing the pressure on that thread and on appointing good and true people to the Supreme Court and to lesser courts. The judicial appointments that President Trump has made will be his most enduring legacy.
The current climate inside the DC Beltway is one of fear of disclosure of what the Obama Administration did by spying (yes, I use that term advisedly) on the Trump Campaign. If there is one cardinal rule for law enforcement and executive power in the USA it is that one does not spy on one’s opposition. Watergate was a test of that behavior and we all know how that ended. What Barack and friends did was much worse. They relied on Hillary Clinton’s coronation to cover the skeletons. Ooooops. They had an FBI insurance policy in case it all hit the fan but the FBI proved to be incompetent. Now there’s a revelation.
All the Democrats can do is relentlessly attempt to discredit President Trump and those who serve in his administration.
Why is Government Healthcare Important?
If the government controls healthcare, they are able to control YOU. Even relatively healthy people can be leveraged into doing what the government wants you to do because care can be denied to people you love. It’s their key to controlling your ownership of firearms. It’s the key to everything. And the donkeys are getting much more aggressive now.
All of the major Democrat candidates are calling for an end to private healthcare. Your right to choose can be destroyed with the stroke of a pen. Obamacare was the opener and it would have been expanded under Clinton, had she won. But she didn’t. By refusing to deal with it responsibly (thanks Paul Ryan), the Republicans have allowed an opening. They always seem to do that, don’t they?