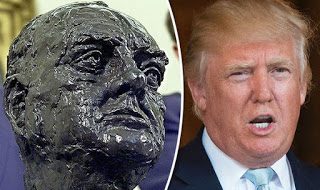 (Fox News) President Trump has returned a bust of former British Prime Minister Winston Churchill to the Oval Office, which had been removed by Barack Hussein Obama in 2009.

Reporters first noticed that the bust had been placed back in the room on Friday, just as Trump was signing a series of executive orders at the Resolute desk.
Obama had moved the bust to the White House residence during his first few days in office and later installed a bust of Martin Luther King Jr. in its place.
A spokesperson for British Prime Minister Theresa May confirmed last week that Trump had personally asked if England would loan the bust of Churchill to the U.S. once he took office.
It speaks to the special and enduring relationship that the United States still has with Great Britain. President Trump started working on a trade deal with the UK before he took office. It remains to be seen how those details emerge. There have already been rumblings in Europe about the US giving most favored nation trade status to the UK. Their question is “what about us?”

The MLK bust is still there as well, but Churchill is back.

The Women’s March on DC 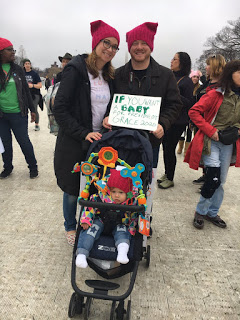 I only have one question. What is their point beyond the fact that they want the right to kill their children in utero on a whim?

There is a picture of a couple at the protest (right). In the picture you’ll see a man and a woman (presumably – they may be trannies). Each are wearing vagina hats. They have a baby, who they didn’t kill – give credit where it’s due. The baby is also wearing a vagina hat. I can’t help but believe that one or both of them are government employees inside the  DC Beltway.

Everyone has a right to protest. In Wisconsin they might wear styrofoam cheese hats. In DC, it’s a vagina hat. In California, maybe a sombrero – or is that cultural appropriation? It’s tough for me to keep up.

I hope that the women and their castrati enjoyed their day. They can return home, satisfied that they fired a shot for reproductive rights.

President Trump didn’t watch the protest. He was at the CIA dealing with the nation’s security.