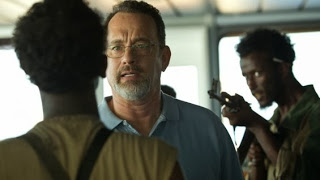 Facebook
Twitter
Pinterest
WhatsApp
If you go to a movie to see the “real and untold story” and expect to see a genuine portrayal of events, you might be disappointed by the new feature film, Captain Phillips, starring Tom Hanks.
Hanks’ politics are not mine, but he does a good job of acting in a movie based on a book about the incident (possibly self-serving) that was written by Richard Phillips, the subject of a hostage situation on the high seas in 2009.

If the crew had half a dozen rifles between them, they could have stopped the hijacking from happening in the first place but merchant ships chose to travel through pirate infested waters unarmed. That is the message that people might decide to take away from the film. It’s not the message that Hollywood decided to send. Native savages in fishing boats took a number of ships in the waters off Somalia and in some cases, made millions in ransom. The way to stop that from happening is to kill the natives turned pirate.
Of the four pirates that took the Maersk Alabama on April 19, 2009, three died by head-shots administered by SEALs on the Amphibious Ready Group (ARG) on the USS Boxer and one was captured and subsequently sentenced to 33 years on prison in the US.

(KSDK.COM) The new Tom hanks movie is getting rave reviews, but also taking some heat. Captain Phillips tells the real-life story of the Maersk Alabama, a ship hijacked by Somali pirates in 2009.

The captain was taken hostage and later hailed as a hero. Now, some of the crew members are speaking out, saying the movie gets it all wrong…Back in 2010, Perry told CNN he and most of the crew couldn’t believe the story being painted about their captain, Captain Richard Phillips: that he had given himself up in exchange for the safety of his crew. Left out of the entire story, says Perry, is the captain’s recklessness that steered the Maersk Alabama into pirate-infested waters.

All in all, I enjoyed the film and give it an 8 out of a possible 10, which amounts to a recommendation to see the movie.