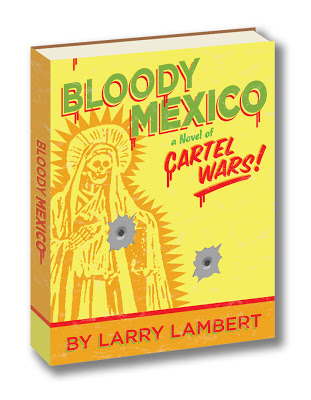 cover art by Vince Peterson
Published by Niederhauser Anwendungen (Asia) Ltd. – Hong Kong
A Division of Niederhauser International AG, Bern, Switzerland
The story will be coming to you and available at amazon.com and barnesandnoble.com early in 2011.
Worldwide, we spend more money on narcotics than we do on food. The Mexican cartels do manufacture some drugs such as methamphetamine and they grow marijuana and opiates. They’ve made the billions of dollars by moving cocaine that was grown in Peru and Brazil and refined in Colombia through Mexico and into the world’s largest consumer of everything, the United States of America.
The recent death toll as a result of the cartel wars easily tops 100,000 based on competently vetted, knowledgeable sources. The Mexican government doesn’t really know how many people have been killed, but it continually understates the facts because it has to. Full disclosure would be to admit that there are vast tracts of that nation that are under the absolute control of drug cartels.
The unstable situation in Mexico, caused in great part by the narcotics cartels, is quickly becoming an issue of American national security. This novel explores a scenario in which it would clearly rise to that level—but it’s only a story. It’s just a flight of imagination. Keep telling yourself that. It will help you sleep at night.