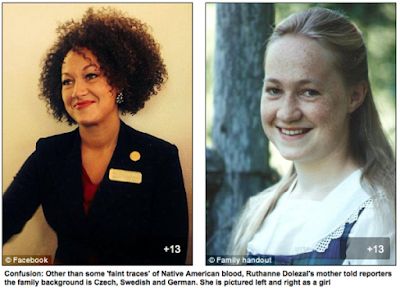 Facebook
Twitter
Pinterest
WhatsApp
I thought that I had packed in blogging for the week, but the snarky story about the president of the Spokane NAACP being a “black woman trapped in a white body” was simply too much to resist. I’m not taking a shot at Rachael Dolezal the way that all you haters are. If Bruce Jenner can feel that he was always a woman and make the change to Caitlyn Jenner, why can’t Rachael Dolezal announce that she’s a negro and have everyone believe her.
In our confused world, why can’t an outspoken African American leader be white – but yearning to be black? And why is she now being victimized for having whined about being a black victim? Somebody call Vanity Fair and see if she can’t get a photo shoot.

Rachael Dolezal, an instructor in African American Culture at Eastern Washington University is actually a white woman from Montana. Her parents outed her.

I haven’t heard of anyone planning to give her an award for courage, but she sure needs one.  Would anyone rule out a Nobel Peace Prize?

If Elizabeth (Fake Indian) Warren built a political and academic career around being an Indian, and she wasn’t, why can’t Rachael Dolezal do the same thing? Except that it’s been done – and done successfully.
Will the NAACP stand behind me if I try to get a job teaching African American Studies at a local university in Southern California? The plain answer is that I don’t know because I have never tried.