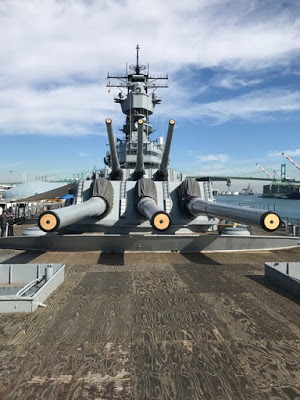 Our mutual blogging friend, Dr. Jim, a volunteer on the USS Iowa (BB-61) hosted a behind-the-scenes tour for me yesterday. Thank you Jim. It was a GREAT EXPERIENCE! There are about 1,000 volunteers that keep the ship running with about 300 of those working as key players. Dr. Jim is one of those essential people–until he leaves for Colorado and makes his CALEXIT.
For those of you who have seen the movie, “Battleship” where the USS Missouri takes on aliens, the USS Iowa could be at sea in her current configuration. The standard start-up time for an Iowa Class Battleship is 24 hours. If there was sufficient crew and fuel, she is capable of getting underway, and has some rounds for her 16″ guns.
The navy won’t repo the Iowa, but the concept of using it offensively does have some fantasy appeal even if there are no space aliens to shoot at with the big guns. 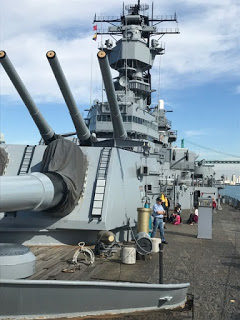 Having Dr. Jim take me in tow and show me what the normal public tour never sees (such as Forward Fire Control) and getting my mitts on the triggers of the 16″ guns, was nothing short of spectacular.
Thanks again, Jim. It was an excellent break from reality. Today, back to reality.