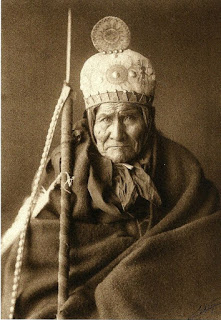 Now that the White Wolf Mine is in escrow and the White Wolf Lumber and Mining Company is in the process of being restored to its former glory, it’s time to think about some of the people (White Mountain Apache) who lived up on the Mogollon Rim in Arizona.

Before I go further, though, it’s important to note each of the different Apache tribes listed below (I listed those tribes recognized by the USGOV – Within each tribe there were bands, which operated semi-autonomously from their particular affiliated Apache tribe. For example, Geronimo was a member of the Bedonkohe band of the Chiricahua Apache). Some such as the White Mountain Apache lived in ponderosa pine forests. Others lived in deserts or on the plains. 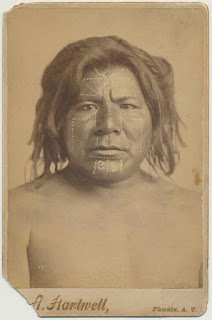 In our present day, long after the fact, you see photos of Apaches wearing elaborate face paint to ‘recreate’ the past, but the truth is that most Apache wore more symbolic spiritual markings such as the warrior (left) and Geronimo, dressed as a medicine man rather than as a raider. (above right).

Not all Apache tribes painted their faces elaborately but many warriors wore caps when they went on the war path of the sort illustrated (below).

When a young man felt ready, he would begin the novice warrior complex of his first four raids, which were permeated with religious beliefs and rituals. Having been accepted as a member of his first raid, the young man was instructed by a war shaman. The shaman would give the young man a drinking tube, a scratcher, and a special war cap, which unlike those of the mature warrior did not bestow spiritual power. The apprentice warrior was sacred and was identified with their cultural hero called Child of the Water. 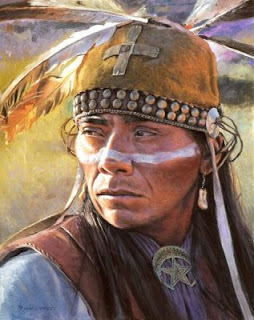 The young Apache used the ceremonial warpath language, which replaced words for common objects during the raid. The scratcher was used to scratch him and the drinking tube to ensure water did not touch the lips. When eating, the young Apache would eat only when the food was cold in order to bring the raiders good luck. He was also subservient to the other warriors and would fetch their water and wood. If he did well on the first raid, he would be invited back for another raid. Upon completing four successful raids without deviations in his conduct, the young Apache received the coveted reward of recognition as an Apache warrior. Often, the shaman would show him the pattern of paint that he should wear and presented him with a medicine cap.

Warriors wore a shirt, breechclout, and moccasins normally reaching above the knee; he carried a rope, blanket, water jar, fire drill, rations of mescal, pemican or jerky, and his weapons. The Apache might employ a shield, bow, arrows, lance, club, tomahawk, knife, and during the Apache Wars, a rifle and cartridge belt. They frequently blackened their weapons to camouflage them.

For any of you who served in the military or hunted, you will know that a flash from glasses, a bright face or reflective object will mark your position many miles from the observer.

The Apaches did not adapt a horse culture, as their terrain and lifestyle did not lend itself to the adoption of the horse in the same way as did that of the Plains Indians. Horses were used in large raids, but an Apache warrior was equally likely to travel on foot, allowing him to use the terrain to conceal his movement. Horses could be heard for miles and were easily tracked. An Apache warrior could run as many as 70 miles a day, and Apache women thought nothing of trotting 60 miles to present treats to their children when they had been placed in boarding schools in later years.
Concealment was a hallmark of the Apaches. In one historical instance, Quick Killer told a soldier to turn his back and in an instant had disappeared. In a spot just a few feet away, he emerged after completely burying himself under thick grass.