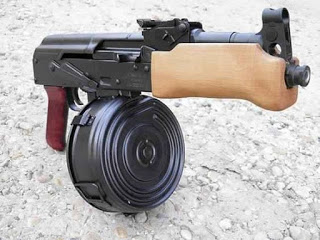 Do you like the AK 47 Mini Draco Shorty with the 75 round drum magazine (right)? Way too heavy for practical use, BUT as a spray and pray weapon in close quarters or in a jungle environment where you want to cut brush, the Mini Draco is an interesting option.
In my comings and goings, I recently ran into some Russian mercenaries carrying Mini Dracos, which they called pistols, and I guess that they are.
Whether or not the next president is a nasty, old crone with a handler close at hand with the diazepam in the likely event that she goes into one of those famous seizures — or the nation selects Donald Trump, one thing is certain and that is another land war in the Middle East. The other certainty is the use of mercenaries to fight that war, at least in part. In the United States, we don’t call them by that name. We use the term, “contractor”.
I do not suggest that the words “contractor” or “mercenary” are bad or that the use of civilians to replace soldiers is always a bad idea. Civilians can do things outside of the bounds of the Uniform Code of Military Justice. It screws up your military service record, but it’s not all that uncommon that small groups of special forces types are ‘separated from service’, perform a task and then are ‘sheep-dipped’ back into their particular branch — say, the US Navy, for example. What they did as civilians is unspoken. I could give examples, but I’d end up like one of Hillary’s advisors – shooting myself in the back seven times in an act of suicide. So it’s all hypothetical here on the blog.
Private military contractors perform tasks once thought to be inherently governmental, such as raising foreign armies, conducting intelligence analysis and trigger-pulling. During the Iraq and Afghanistan wars, the trigger-pullers constituted about 15 percent of all contractors. Special Forces types are lured to that sort of job because you leave the service and do the same job the next day, pulling the same trigger, for three times the pay or more.

For decades now, the centrality of contracting in American warfare—both on the battlefield and in support of those on the battlefield—has been growing. During World War II, about 10 percent of America’s armed forces were contracted. During the wars in Iraq and Afghanistan, that proportion leapt to 50 percent.  Today, America can no longer go to war without the private sector. Today, 75 percent of U.S. forces in Afghanistan are contracted. Only about 10 percent of these contractors are armed, but that isn’t the point. America is waging a war largely via contractors, and U.S. combat forces would be impotent without them. If this trend continues, we might see 80 or 90 percent of the force contracted in future wars.
The Russians are not dependent on contractors because of the nature of the social structure in that nation. Most independent Russians find employment on the national stage, outside of Russia. The exception to that is in places like Ukraine, where the presence of Russian soldiers fighting along side the pro-Russian rebels and operating sophisticated weapons systems could be embarrassing. So the Russians are no different from ourselves to that extent.
The French instituted the French Foreign Legion to serve its interest where the loss of French soldiers would be a problem back home and it’s been a noteworthy success since 1831. It started out as a way to get foreigners sponging off the system on the streets of French cities both gainful employment, a pathway to French citizenship and out of France to fight. Legionnaires swear an oath to the Legion, not to France. They are led by French officers. Is that where the US is headed? Maybe. I’ve heard it bandied about.