In Turkey the revolution began when Prime Minister Erdogan’s Justice and Development Party (AKP) was elected a decade ago. It started a slow moving Islamist revolution that gutted the political power of the Army and continues to move Turkey toward a system of laws based on Sharia. It was not the revolution that the secularists expected. On Sunday, protestors clashed with police for a third day in Istanbul. One press service reported 1,000 people were injured and 1,000 were arrested in the past three days. Protests also took place in Ankara, Adana and Izmir. One Turkish news source claims protests have occurred in 67 of 81 provinces. More are threatened on Monday.

(BBC) Ten of thousands of people took to the streets of towns and cities, many calling on the government to resign.

Police pulled out on Saturday afternoon, reportedly after President Abdullah Gul urged restraint, and by Sunday there was a carnival atmosphere.

But clashes continued, including in the Besiktas district, where police fired tear gas against protesters, some of whom built barricades or threw stones at Mr Erdogan’s Istanbul office. 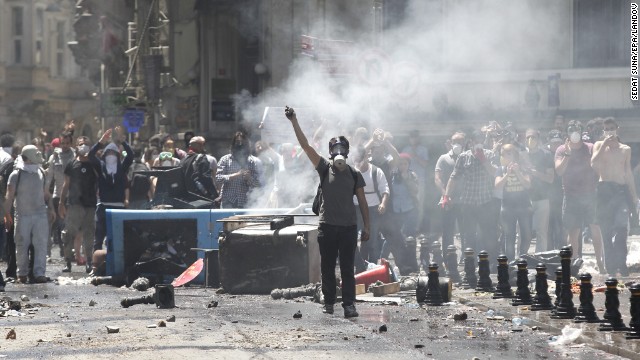 Welcome to the Turkish version of Arab Spring — sort of. Turkey has been a secular nation until recently. That means that Turks became accustomed to living their respective religions (most of the Muslims were quiet, tolerant Muslims historically). However, all that is changing. The Turkish Government plans to demolish the last large green space and public park in Istanbul and replace it with a large mosque. That provided the catalyst for the protests, primarily by secular urban youth. Another factor was a new law restricting alcohol sales. Some Turks like to have a drink privately. They won’t be able to do that now unless they buy very expensive smuggled booze.
The root of the unrest is the growing lack of empowerment for secular interests. People who are less devout Muslims are taking umbrage at being bullied. However it’s not the first time that we have seen devout Muslims push people around on this planet.
Turkish youth in the big cities are often out of touch with the electorate at large in almost every Islamic Middle Eastern country. Their ideas about elected government are naïve, as they have been reported in media interviews. Young city dwellers who support the protests are railing against the actions of a legitimately elected president and parliament. Their complaints are that the government is too authoritarian, too Islamist and not representative of secular Turks. They thought that the Islamists would live and let live…famous last words.
The Erdogan government is representative of the majority of Turks, as evidenced by its repeated electoral majorities. Any concessions it makes will be temporary. The direction of Turkey’s political development is set and popular, except among some in the cities. But I don’t think that we’ve seen the end of this.