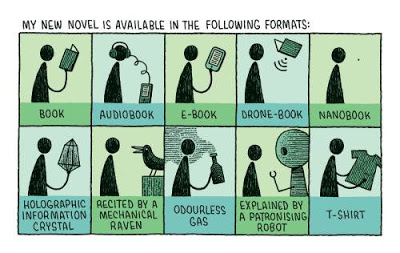 Being able to focus at the task you’re undertaking is critical to success.

I am trying to focus on writing again. (groan if you must) and on reformatting, The Black Scorpions – for Amazon, to make them happy enough that they’ll take it live again — and on getting the next story out. I’m under no illusion that the new work will sell, but that’s how it goes.
The key to all of this is focusing on ten things at once and on trying to get them all right.
2. General Update

Government sources said on 30 April that Maritime Self Defense Forces ships have been ordered to escort US supply ships.
Defense Minister Tomomi Inada ordered the Maritime Self-Defense Force helicopter carrier JS Izumo to protect a US Navy supply ship in the Pacific. The Izumo is to leave Yokosuka base on 1 May and rendezvous with the supply ship off the Boso Peninsula, east of Tokyo, and accompany the US ship to western Japan.
This is the first order issued to the Maritime Self Defense force under the security legislation that became effective in March 2016. That legislation expanded the definition of self-defense to include collective self-defense, which can include guarding Allied ships as part of the Self-Defense Forces’ enlarged responsibilities.
Even though the escort duty is largely symbolic, it does set a precedent and is game changing where Japan’s military metamorphosis is involved.
The Annual Spring Offensive
The Afghan Taliban announced the start of their spring offensive. The offensive is named “Operation Mansuri”, after the Taliban’s late leader Mullah Akhtar Mohammad Mansur.
In a statement published on the Voice of Jihad website, the Taliban said the operation is effective from 28 April in civilian and military areas. The offensive will have a dual political and military approach.

The political strategy will focus on local administration. In areas under Taliban control “particular attention will be paid to establishing mechanisms for social justice and development.” In “cleansed districts and areas”, the Taliban will focus on state-building and erecting institutions for social security and legal rights.

The Taliban political strategy is to build a shadow government at the local level. In most so-called “cleansed” areas the Taliban already have implemented a Sharia-based administration.
The Turks 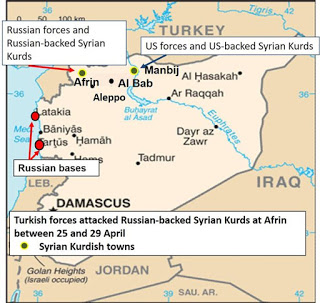 Over the weekend, Turkish President Erdogan indicated that Turkish air strikes against the Syrian Kurds were intended to send a strong message to the US against cooperating with the Syrian Kurds.
On 30 April, he also threatened additional action. Erdogan said, “We can come unexpectedly in the night. We are not going to tip off the terror groups and the Turkish Armed Forces could come at any moment.”
Erdogan said the sight of American flags in the convoy alongside the insignia of the Syrian Kurdish People’s Protection Units had “seriously saddened” Turkey.
Erdogan’s statements confirm that the attacks against the Syrian Kurds are part of an operation aimed at changing the US policy of cooperating with the Syrian Kurds as well as defeating terrorists, as Turkey defines them.
One of ripple effects of the Syrian civil war is the stress it has placed on NATO countries. It has strained loyalties; spotlighted fundamental differences in national security interests and called into question ultimate purposes.

On 28 April, Turkish authorities suspended 9,000 policemen and arrested 1,120. On Friday, they had warrants to arrest another 3,000 additional policeman. On 30 April, Turkey’s official gazette published a decree indicating that 3,974 civil servants were fired on 29 April and that 45 civil society groups and health clinics were closed.

Then there are the Norks 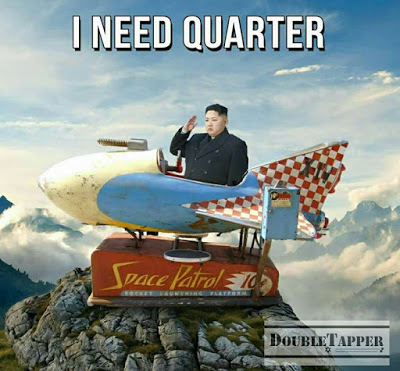 The arrival of the USS Carl Vinson aircraft carrier strike group and of the USS Michigan SSGN, cruise missile firing submarine,  prompted a “reset” of the major propaganda themes.
The latest set of themes treats naval activities by US forces as threatening provocations. In the last two months, the themes concentrated on the annual Allied ground force exercises and UN sanctions.
In a separate article, North Korean forces vowed to react to the slightest “nudge” by the USS Michigan, for example, turning it into a “water ghost.”
The Foreign Ministry statement cites the US naval activity as providing further justification for North Korea’s nuclear deterrent. The main point of the statement is in its concluding paragraph, which appears to announce that North Korea will conduct more nuclear tests in response to the policy formulation “maximum pressure and engagement.”