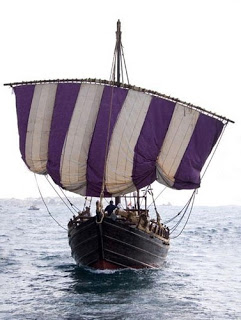 Facebook
Twitter
Pinterest
WhatsApp
The Thirteenth Colony
(part two)
part one
a fictional short series
The best way to find out if you can trust somebody is to trust them.

At the age of forty-two, Governor Marcus Marius Longinus rules over the province of Mauritania Tingitana. The recent scandal involving the seventeen year old son of a Senator from northern Italy and Marcus’ young, beautiful Gallic wife, Mattia has been solved by sending Tribunus Angusticlavii (appointed mid-grade officer) – Quintus Aelius Ulpius, farther than the pillars of Hercules to a point somewhere far beyond the ends of the Empire where it is likely that he will meet his end. The plan calls for none of his blood or the blame for his blood to fall at the governor’s feet.

Misjudging love for lust, the governor is further humiliated when he learns that his wife has robbed his purse and has hired a Phoenician ship, determined to follow her lover, Quintus, into a form of exile that he is unlikely to return from. Some say that she hired pirates, but in the capital of the province, Tingis (Tangiers), definitions of hero and villain were every bit as subjective in 118 AD as they are today. Her departure follows that of Quintus by just over two weeks.

An optio (corporal), ten auxiliary soldiers and two of her personal slaves leave with her, causing the governor to threaten the centurion and the cohorts that serves as his bodyguard with decimation. The threat, while heartfelt at the time it is uttered, is empty.

The trip down the African coast has been anything but ideal from Mattia. She has experienced sea sickness and is inconsolably melancholy.

Cornelia brushed Mattia’s hair back as her mistress vomited in a bucket for the third time that morning. There was not much to heave, because Mattia hadn’t taken water, as her slave tried to have her do.

Pulling back from the bucket, she looked miserably at Cornelia.

“Mistress, the sea is calm and look at the Apollo’s chariot, rising over the sea like thunder. The bright red sky is good news for us.”

“It’s not the sea, Cornelia, I am with child, and it is not Marcus’. It’s why I had to leave and find Quintus.”

“How can you tell for certain, Mattia?”

“Because the Governor, my husband, was unable to raise his phallus. It was not a cobra, but a worm. There hasn’t been anyone except Quintus — ever. I had no choice but to flee. I couldn’t go back to Transalpine Gaul. My father is mayor of Colonia Copia Claudia Augusta Lugdunum (Lyon, France) and while he might harbor me, Marcus has friends and — reach. My father sold me to Marcus and that is the end of the matter where he is concerned.”

Cornelia looked confused. She was born Brunhild, and had been taken as a slave by Romans beyond the Danube. Her Roman name came later. How could Mattia, a Roman citizen be bought and sold in the same way that a slave could?

Mattia clarified, “There is a bride price, and in my case it was significantly high, that Marcus paid my father. I’m not a slave under the law, but very near to one in actuality. He never penetrated me, he was never able, but he beat me when he couldn’t. Quintus was my first, and I hope that he will be my only.”

Flavius, the optimo, came into the dark captain’s quarters that Mattia annexed, “How are you today, M’lady?”

“Miserable. Is there any news from the captain? How much farther?”

“I have asked on your behalf, but he sees nothing on the shore and we must continue south until we see something. At least that is what he advises.”

The scene where the shipwreck survivors first landed has changed as everything but the ship’s boat has been moved through the jungle, to a gentle knoll rising above the flood plain about two hundred yards inland of the bay. A stockade is being constructed atop the knoll and a watch tower rises above the stockade.  The enclosure has been constructed according to standards that the Legion has been using for almost two centuries now. The ship’s boat has been making trips to the reef, wood used to construct the ship has been salvaged and towed to the surf line, and released. Once on the beach, it is collected for the use of the fortress.  Nearly one third of the knoll has a rocky face. There is not sufficient wood to build a wall on top of it, so thorn bushes have been collected and used to create a barrier there. It is judged to be every bit as effective as a wall.

The shelter is in place as is a protective barrier, but food remains a problem. Grain supplies, taken from the foundered Sea Monster and Fidelis, are being expended and there is nothing to replace them. The colony’s survival by all standards required continuing support from the provincial capitol until crops could be grown. They supplement their grain by fishing and hunting, but one hundred mouths to feed provides a continuing drain on resources.

Quintus stepped ashore from the ship’s boat, hauling a stringer of fish, taken from the sea by a combination of harpoon and crude nets. “We’ll need a hundred fish of this size to feed a hundred people each day.”

Seleucus took one end of the stringer and counted. “Eighteen, there are only eighteen here.”

“It’s all we could catch, that and this big shark in the bottom of the boat that Tullius harpooned.”

Seleucus looked at the captain of the now sunk, Fidelis and saw that he couldn’t hide his smile. The shark filled the inside of the boat and its blood washed out as its on large wave when they turned the boat on its side to disgorge the catch.

Quintus said, “It took us hours to land it, but we can roast it on a fire and everyone will have fish for dinner tonight.”

Later while everyone ate the shark, Quintus and Ursinius stood on the wall, taking a turn at watch. “We need to send the boat out to explore,” Ursinius said. “Maybe crocodiles, we can kill them with spears and shields. Lure them out of the water, ground the shields and pierce them. I saw it done in Egypt. You just have to make sure that the small ones take the bait. The fifteen footers don’t care that you have a shield and will take you.”

“Are they good eating?”

“Yes, well, not that good, but better than dirt. I’d prefer a roasted bullock.”

“We can’t keep doing this, Ursinius. We have a camp with a fresh water spring that we have enlarged, and we have walls, but we will run out of things to eat.”

“You saw the two boats that the sailors are building?”

“We will send people to Lixus when those boats are ready. You and I will draw lots. One goes, the other stays.”

“I’m seventeen years old, Ursinius. The people here only suffer me because you stand behind me.”

“And I am a Tribunes Angusticlavii, a thin stripe tribune, not Lataclavius. Not a broad stripe tribune, an intern, sent to Mauritania Tingitana to handle small duties. Work befitting an oldest son driven by the political aspirations of his father. The only thing I have been successful at since I left Rome is falling in love with the Governor’s wife. That fire is still not quenched, not even now after all that we have been through. Not even at the ends of the earth.”

Back, in the Roman Province of Mauritania Tingitana

The political world  of Rome changed only slightly with the death of Emperor Caesar Trajan and the succession of his adopted son, Hadrian. Unfortunately this change has had tectonic implications for the Governor Marcus Marius Longinus as his perfect solution has met severe complications. The arrival of a missive from the new Emperor, Caesar Hadrian, announced the official recall of Quintus, his nephew, to Rome. Quintus is to serve in the Emperor’s Praetorian Guard. As with most emperors, Hadrian prefers to salt the praetorians with blood relatives. It is a familial relationship that had not been known to the governor and the public banishment is something that he can not hide from Caesar.

A carefully worded response, indicating that Quintus may not be available for service in Rome for quite some time has provoked an immediate response. A fast trireme (war galley) has set anchor in the harbor and a delegation of praetorians are even now making their way to the governor’s fortress to ascertain more details than were included in the governor’s letter, which read to all as if he had an ass to cover — and something to hide. The governor is concerned because two quaestionarius accompany the praetorian officer and his deputy.

Historical note: We are in the time of Hadrian, and I thought that you might find this video on Hadrian’s Wall to be interesting.

The Thirteenth Colony will be continued

Author’s Note: I originally intended this to be a three part series with each portion of the story being named independently of the others. After examining my notes, I realized that I couldn’t possibly fit the entire story into three bloc posts, even though it is a “short”. I’m calling longer episodics “short series” because it could go for three or more separate blog posts to develop the characters to a point where I want them developed, etc.