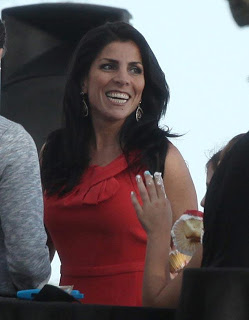 No, it’s not a Rule 5 blog, but it’s close. First, we have an FBI special agent sending shirtless photo’s of himself to “the other woman”, Jill Kelley. (Wall Street Journal)

The federal agent who launched the investigation that eventually led to the resignation of CIA director David Petraeus was removed from the case last summer over concerns that he “might have grown obsessed with the matter,” according to the Wall Street Journal (full article above)

The FBI agent began his official inquiry into the matter on behalf of a Jill Kelley, woman in whom he apparently had a romantic interest.  Kelley, meanwhile had a romantic interest in General Petreus and didn’t like the thought of being sidelined by Paula Broadwell. Ms. Kelley told the FBI Special Agent that she received about a half a dozen hostile emails from Petraeus’ mistress Paula Broadwell.
The agent referred the matter to a cyber crimes unit but was prohibited from the any role in the investigation after the FBI found out that he sent shirtless photos of himself to Kelley. (Business Insider)
Jill Kelley (37) is a married mother of three (married to Dr. Scott Kelley, MD), living in Tampa, Florida where she is an unpaid “social liaison person” at McDill Air Force Base, home to the US Joint Special Operations Command (JSOC). This does not mean that Mrs. Kelley is a strumpet, but it’s possible that Paula Broadwell (wife of Dr. Scott Broadwell, MD) thought that she was, based on the e-mails that ultimately ended General Petraeus’ career.
(Natalie Khawam is Jill Kelley’s sister)
Lieutenant Colonel Broadwell grew up in North Dakota and as a high school senior she was an All-State basketball player. Following high school, she graduated from the US Military Academy at West Point. She ranked first in her class for fitness. She earned a master’s degree in International Security from the University of Denver and a Master of Public Administration from Harvard University. In 2008, she entered a Ph. D. program at the Department of War Studies at King’s College, London.
LTC Broadwell served as the Deputy Director of the Jebsen Center for Counter-Terrorism Studies at Tufts University and in that capacity, she interfaced with the FBI Joint Terrorism Task Force.
To give credit where it’s due, LTC Broadwell is an amazing woman who has had an amazing career. It’s sad that the whole mess came to the national stage. It’s amazing how the Press will dramatize situations such as this one, while ignoring scandals such as Operation Fast and Furious and the Benghazi Affair which have stained the Obama Administration.

US Marine Corps General Allen and his wife (right) are now in the middle of the scandal, as you might know by now.

Kathy Allen and Holly Petraeus have one thing in common besides being married to four star generals and I’m not going to exercise bad manners and mention it here on this blog. However, the wives’ charming personalities and sweet spirits aside, it’s not difficult to understand how their warrior husbands were swayed by charming and attractive “other women”.

General Allen exchanged roughly 30,000 e-mails with Mrs. Jill Kelley (37 – mother of three). They have been described as e-mail sex, though I have not read them and wouldn’t if they were available to read.

I’m not sure whether it’s appropriate for a theater commander and full US Marine Corps General to send 40 e-mails a day to a hot socialite (Jill Kelley) or not. Others will judge him.  HOWEVER, if you were a Marine lieutenant or captain working for General Allen and were caught doing the same thing, you’d be bounced from the US Marine Corps – or your career would be ruined by a scathing FITREP (accomplishing the same thing).

There have been a long line of US admirals and captains who have been relieved of their commands and had their careers trashed for less over the past 18 months.