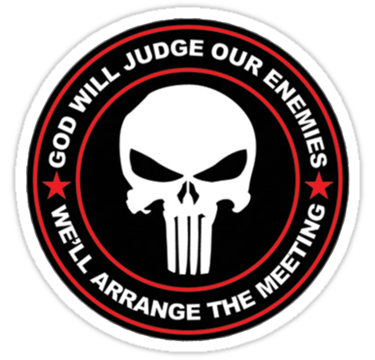 Yes, it’s Sunday and I know that you’re here at Virtual Mirage for your sermonette. This rant has more to do with trying to define who the people President Obama is working diligently to sell firearms and ammunition to are. Say what you will about Obama, but he’s done more single handedly to promote the sales of arms and ammunition to the American people than any other president in history including George Washington. After six years in office, you still can’t readily buy .22 long rifle ammunition easily. You need to watch for the ammo to become available like a hawk.

More to the point:  Do white middle-class and working class voters perceive the Democratic Party as their enemy? Or are they ready for Hillary Clinton to step into those size 13 Obama wingtips?

Do America’s labor unions convince their membership to vote for the Democratic Party the way that they once did?

I had a conversation with my son-in-law, a police officer who is a member of a police association (labor union). He said that it’s a running joke that the association sends its membership election guides and the only people that they endorse are Democrats. Most police officers vote Republican.

Working Americans have expressed unease at collectivism, at the lies of Obamacare, the Benghazi Massacre and the Operation Fast and Furious debacle that was engineered to provide the Obama Administration with the grist to seize your firearms.

There will always be a coterie of liberal students, bent by their liberal professors who swallow the lies promoted by Marxist/Leninist doctrine, that capitalism is evil…but they don’t work for a living either. It’s easy to sit on a high horse when you eat other men’s bread.

That Red part of the nation (above) is made up of people who Barack Obama and Hillary Clinton have said, “didn’t build that”. They are the racists who need to be punished. They are the ones who’s children are turned away from American universities in favor of a “dreamer” who is less qualified. They’re the ones who hate gays, engage in a fictional “war on women” and cling to their guns and religion. 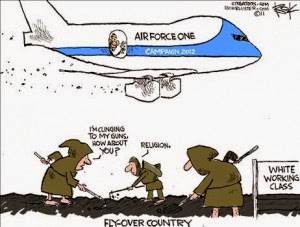 The people in “Fly-Over Country” are the butt of every joke made in Hollywood. They are the fall guy when Democrats make their pitch to any and every interest group under the sun. They are the bad guys who are not subject to any degree of civility or political correctness, who are not to be respected or listened to. If you listen to the Liberal Lobby, those people need to shut up and continue to work harder to pay for everybody else’s food, clothing, shelter, entertainment, drugs, booze, ObamaPhones and degenerate lifestyle.

Those are the new American voters who the president wants to marginalize by adding 5 million illegal aliens to the voting rolls. Many of the same “new American voters” feel that the rioting negroes in St. Louis would end up in a shallow grave if they chose to riot out in the fly-over countryside. It’s not about race, it’s about respect for the rule of law and the rights and property of those that the rioters and looters destroy. It’s country where Reverend Al Sharpton and Reverend Jessie Jackson do not obtain donations. It’s the land where the Kardashian women and poor Bruce Jenner, the whipped, metrosexual father, never tread. It’s where places like Boise and Topeka have housewives, but they don’t have their own TV show where they flaunt themselves… and it’s the place that voted the largest Republican majority into the House of Representatives since 1926.