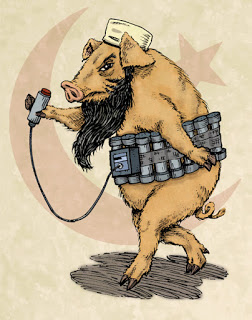 Facebook
Twitter
Pinterest
WhatsApp
The long war began with the birth of prophet Mohammed (may his beard fall out – may a thousand lice infest his pubic area of each follower and multiply twice daily) and the expansion of Islam. They had trouble with El Cid, with Charles Martel and saw defeat when they invaded Europe, but as every blog reader knows, they’ve successfully invaded Europe and Islamic Africa is producing enough people that the movement north of their seed is inevitable given the lack of European resolve to resist. Resistance is not futile, but you need to have the will to do it.

I’m not sure why Europeans are so resistant to having children, but being an American, I don’t know that it’s fair of me to speculate… but when did that stop me? There is a selfishness to modern Europe. The value of ‘me’ exceeds the value of children. We see it in the US too in the me generation. It takes a lot of commitment to raise children. They need their parents’ time and love and devotion. Where time is more precious for personal pursuits, where money is more precious to buy toys, and where love and devotion is a narcissistic imperative, the population suffers. And in the German nation, they thought that the importation of 1 million military age Muslim males would offset their lack of population. What could possibly go wrong?
It’s not just the West. China’s war with Islam is every bit as real, every bit as profound and they are as serious as a heart attack when it comes to restraining the spread. The Russians invited the Muslims to leave. In the British Isles, “Islamophobia” has been criminalized, and drawing a picture of Mohammed is somehow evil… don’t ask me to explain it. The East sees a problem (including the Eastern European nations) and the West takes a different approach to what the Russians refer to as ‘human lice’.

Islam is more of a political movement than it is a religious one. Muslims would disagree, but there is an obvious political bent. There’s also a lot of weird sicko-sexual things that one associates with the movement like sexual mutilation of girls and the self-explained need for Muslim men to rape any woman who doesn’t cover her head and hair. It’s a violent political movement, wrapped around faith.

The war against Islam by non-muslim people will continue long after my life had ended and woe to the people who ignore the threat.