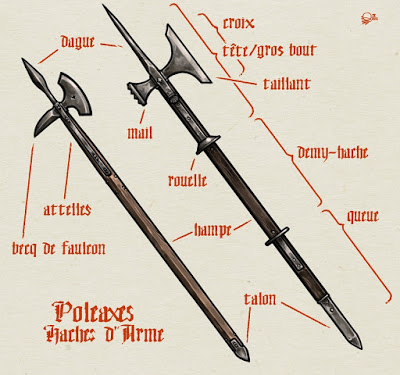 This may strike you as a strange request, but I’m trying to source a quality poleaxe. There are different varieties. They were widely used about a thousand years ago primarily by dismounted knights and men at arms. I plan to mount one in the rear window of the pick up truck or on the rack behind the rear seat in my Toyota FJ. In both cases, under a shotgun (rifled barrel, SST rounds).
I can anticipate your question. “What in the world would you want with that?” It’s more of a statement than anything else. The weapon would need to be fully functional, the blades sharp. There are several different steels that would work fine. A D2 or even a pattern welded steel (Damascus) would suit my purposes.
I’ve cast about on the Internet, but most of what is available is made in India (no-bueno) of pot metal. Or they are decorative, which doesn’t work either.
The people who drift past this blog are often well informed of such things, so I’m casting out into the blogosphere for sourcing suggestions.
And if you ask, these sorts of weapons are legal in Arizona and most states. Poleaxes haven’t made their way onto prohibited lists. Likely because progressive people don’t consider them to be dangerous. For me, they only have demonstration and education value, not as a weapon…
The obvious question is whether or not I’d accept a puncheon or boar spear instead. There is nothing wrong with either tool, but they’re not quite poleaxes, are they?