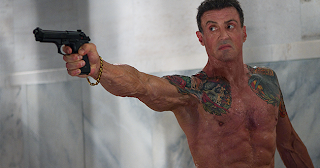 Yes, there are endearing things about the progressive left and about Hollywood in general. They provide a sense of comic proportion to life. In no sense is this comic relief more profound than in the argument surrounding the Bill of Rights. Carrey, star of the slapstick comedy hit “Dumb and Dumber”, which I personally found amusing, is confusing his on-screen roles and life…isn’t he?
I personally don’t hold Carrey’s lack of understanding of the Bill of Rights against him because he’s a Canadian.

Sylvester Stallone, known for violent, action-packed films, weighed in last week on the continuing national debate on guns on the occasion of the premier of his new film, “A Bullet to the Head“, released nationwide this week. Stallone is doing his bit to curb senseless firearms violence. He said, “I know people get [upset] and go, ’They’re going to take away the assault weapon.’ [Who] needs an assault weapon?”
Apparently Sylvester Stallone does. I did some research and the famous Hollywood actor has an active concealed weapons permit, issued by the Los Angeles County Sheriff’s Department. I hate to brand Mr. Stallone as a hypocrite, but how else can you look at it?
THE US DEPARTMENT OF HOMELAND SECURITY
Not to be outdone, DHS has created a training video for teachers, counseling on strategies those teachers can employ if they are confronted by an active shooter situation.

“If you are caught out in the open and cannot conceal yourself or take cover, you might consider trying to overpower the shooter with whatever means are available,” says the narrator. The video shows an office worker pulling scissors out of a desk drawer.

No, you can’t make this stuff up.
I’m going to run with the scissor defense. Even though I don’t think that it’s wise to bring a knife to a gunfight, I am an advocate of fighting with whatever you have at hand.
BUT if we are to encourage teachers to use scissors, DHS should go one step further and TRAIN teachers in the use of scissors as their ‘first line of defense’. A plump, soft, teacher needs to become a killing machine if she’s to use them as advised by DHS.
Here’s a YouTube example – not used by DHS.
The debate over private ownership of firearms entered the theater of the absurd with fools like Stallone and Quentin Tarrantino entering the fray. You can’t make money from glorifying firearms violence and at the same time, profess your disgust at firearms violence and maintain credibility.
DHS is equally foolish and hypocritical. If you encourage people to defend the students under their charge, you should TRAIN THEM. The DHS video doesn’t do this.