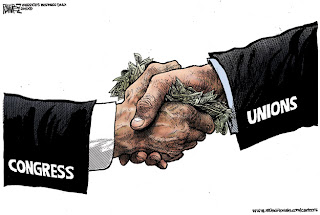 The Teamsters Union had a dream – remember Jimmy Hoffa? The pension fund was a private piggy bank owned by organized crime.

They were real pikers when compared to SEIU. SEIU has forged unholy deals with the US Congress, has engaged in privately “assisting” legislators personal needs and wants, and after the demise of their sister organization, ACORN, they’re the street team of the radical left.

In order for SEIU to unionize all healthcare workers (and skim from the 20% of the national economy they represent), the Congress must pass the “CARD CHECK” legislation. Obama must the various bills passed and in place prior to the 2010 elections. If that deadline is not met, all is lost for his cause. The bills he needs to have in place are the Health Care bill with the public option, the card check bill and the Cap and Trade energy tax.

We already know that if the health care bill is passed the SEIU stands to make a ton of money by forcing union membership on everyone in the government run system. But becoming the largest union in the world is just a fringe benefit. The SEIU’s job is to make sure that once the legislation is in place, no one can tear it down. This is why the Card Check bill is so important. It would allow the SEIU to enslave the health care workers without bothering to let them vote for it. A silly requirement of getting enough cards signed can be easily met by lying to the workers or just forging them. Unions while trying to organize have used both of theses strategies.

(free republic relied upon for some of this post)