The Haitians have long hated America and Americans. Perhaps it has to do with envy?

Haiti’s regional, historical, and ethnolinguistic position is unique for several reasons. It was the first independent nation in Latin America, the first post-colonial independent black-led nation in the world, and the only nation whose independence was gained as part of a successful slave rebellion.

Despite having common cultural links with its Hispano-Caribbean neighbors, Haiti is the only predominantly Francophone independent nation in the Americas. It is one of only two independent nations in the Western Hemisphere (along with Canada) that designates French as an official language

Haiti is THE most screwed up place on the planet – before the earthquake. And that’s quite a statement when you consider the cesspools on this planet: Somalia, Liberia, Ethiopia, Bangladesh, etc. Hatians HATE Americans as a rule, preferring to believe that they have some connection to France, which ruled them when they were a “sugar island” a hundred years ago.

If you throw seeds onto the ground, they’ll sprout in the lush soil, blessed by equatorial warmth and rain. But people in Haiti starve in normal times. 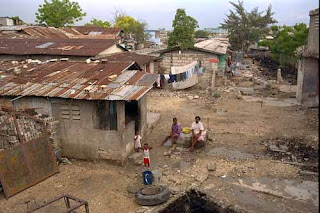 I don’t think we should deny aid, but I don’t think we should send any until FRANCE does. And then we should match the French contribution…
The photo (left) if of Haiti before the earthquake leveled the shanty towns that house the inhabitants of that island of industrious people.
I wonder if Barack Hussein Obama might not want to go to Haiti and be THEIR leader when his term of office in the US has passed in 2012?