Reef Fish (a metaphor for the Obama Nation) 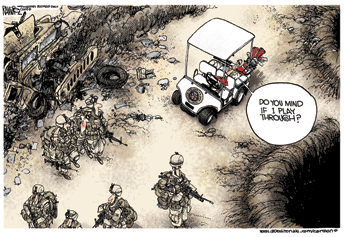 While the nation recoils at Speaker Pelosi’s 1900 page (easy to understand) healthcare bill – don’t bother reading it, just vote for it – We have an army in the field in Afghanistan. And Barack Hussein Obama is dithering over this and that. It’s a prime characteristic of the ObamaNation. So much goes on that’s completely wrong that it’s difficult to remain focused. The Chicago crowd go for the shotgun effect and you need to hand it to them. Their aggressive campaign to push the United States into a strange permutation of utopian national socialism requires constant attention.

I dove a reef in Hawaii today. Yes a pod of dolphins were present – they sleep on the surface during the day in shallower water and hunt at night. There was one green turtle laying on the bottom, getting his shell cleaned by some of the reef fish. 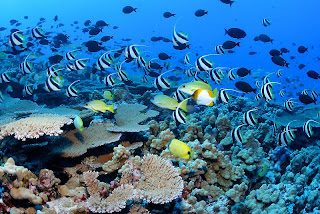 It wasn’t striking in its strangeness but in its similarity to other dives in other years. Many of the reef fish have stripes in order to confuse predators. Which fish in the huge school of striped fish does the predator eat? It’s a metaphor for the ObamaNation’s program of abominable practices where they come at us so fast, all disguised and need to be dissected to understand that they hope the system of opposition (which means us) is overwhelmed. Their strategy did not spring into being without conscious thought the way the reef fish did.