President Obama: “I am not a whore!”

(barackobama.com)
Organizing For Action, President Barack Obama’s legal means of extracting “pay to play” money (not a bribe in the legal sense of the word) has adopted a song as part of its way of explaining to America that the White House isn’t really “for sale”.

Listen to the song. 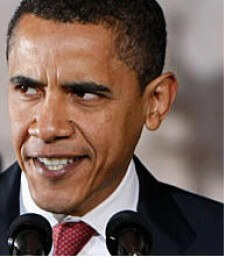 Yes, the president had a gay, transexual nanny when he was a child living in Indonesia (UK Daily Mail) but that does not make him a whore and should not be used in any way to suggest that his character was molded by a queer man who used to care for him and amuse him by putting on his mother’s lipstick. Just because his nanny turned into a gay whore after he left the Obama family’s employ doesn’t mean that any of it rubbed off on the angry black man who became president. President Obama is NOT A WHORE.
Hypothetical candid discussion with Barack Obama (cost of discussion is $500,000.00):

A – Maybe a really BIG whore who would love you long time could charge that much. It depends on what the trick gets in return for the $500,000.00 “donation”.

President O – “Don’t you think that the people who pay $500,000.00 to sit down with me and listen to me discuss my political philosophies are doing it to feed on the wellsprings of my wisdom?”

A –  I could answer with a metaphor – it depends on how high you lift your skirt.

President O – “We do this every day in Chicago.”

A – They use the word “courtesan” because of the amount that they are forced pay for favorable treatment.

A – Perish the thought. Please don’t think of President Obama as a whore. He’s our president, winner of the Nobel Peace Prize and the ‘leader of the free world’.