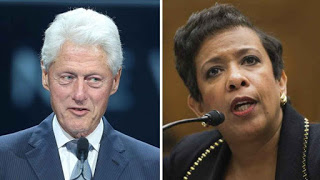 Facebook
Twitter
Pinterest
WhatsApp
It’s 110 in Phoenix and Bill Clinton wanted to golf. What’s unusual about that? He’s had heart surgery and a lesser man might not want to golf on the surface of the sun but he’s not a normal man. He’s the former president and should be able to go on a golfing holiday whenever he wants to. He’s also filthy rich from  he and Secretary of State Hillary Clinton having deals cut with the Saudis, and with every corrupt monarch and despot on the planet while she was in office. He has his own jet, his Secret Service detail and life is good. Why shouldn’t he land in Phoenix in mid-summer to play a few rounds? I swear, you bloggers have dirty minds. Sure, he’s going to get laid too, he’s Bill Frigging Clinton.
So there you are.

Now, while you’re in Phoenix, golfing and boinking your life away, on the eve of the release of the Benghazi Massacre Report. Sure it might cast a shadow over your wife who is running for president but she’s slithered out of tighter places than that before. She’s also under criminal investigation by the FBI for a series of felonies, but her supporters would still vote for her if she was standing over Trump’s lifeless body holding a bloody knife. Life is good.
As luck would have it, your golfing vacation coincides with the arrival of Attorney General Loretta Lynch, who is overseeing Hillary’s criminal investigation. You’re a Clinton, you’re lucky, you weren’t impeached for perjury before Congress and you’ve got a lot of Democratic Party favors owed.
Lynch might want to know how your grandchildren are doing and you clearly want to know how hers are doing so you rent a sanitized third aircraft, parked on the tarmac at Sky Harbor Airport. She arrives in her government jet and you leave golfing to meet with her for thirty minutes, surrounded by your Secret Service Detail and her FBI Security Detail. Bloggers are skeptical, but this is how secret meetings are arranged. It takes 30 minutes to bang out the discussion of grandchildren, and Lynch, who was appointed to the federal bench by President Bill Clinton takes the opportunity to thank him for that. The airplane/meeting place is billed to the Clinton Foundation’s credit card and it all went perfect.
Except the local ABC News affiliate (KNXV) isn’t in the Clinton Foundation’s orbit. It’s in fly-over country. And the local news reporter wants a Pulitzer.
Lynch  didn’t mention her meeting with Clinton but when ABC News brought it up, she reported nothing unusual in her meeting. Just two old friends who wanted to chat about grandchildren. And the State Department wants to wait until after the election to release more of Hillary’s e-mail…
Nothing more to see here folks, move along. Look, a squirrel!