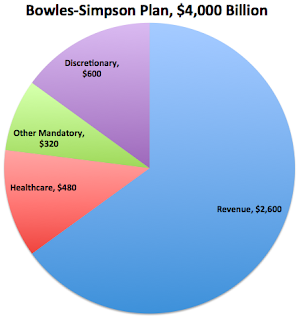 Facebook
Twitter
Pinterest
WhatsApp
Americans want big government when it comes to not taking responsibility for things and delegating those decisions to — big government. The problem comes when you need to pay for it.

Bowles-Simpson comes out of the Debt Reduction bi-partisan committee and it generates revenue through big tax increases and cutting spending. Bowles-Simpson get their $2.6 trillion in new revenues by first assuming the Bush tax cuts for the rich expire, adding $800 billion to their baseline. After that they broaden the base. Bowles-Simpson would turn the mortgage interest and charitable giving deductions into 12% nonrefundable credits, phase out the employer healthcare exclusion by 2038, tax municipal bonds, cap tax-preferred retirement contributions to $20,000 or 20 percent of income and eliminate all other tax expenditures. They would tax capital gains and dividends as ordinary income. Even with a top marginal rate of 28 percent, that’s a lot more money coming into the IRS — especially compared to President Obama’s plan. 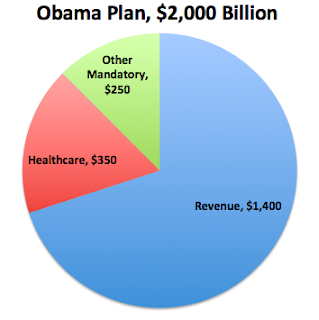 The Obama plan calls for smaller cuts – and smaller revenue, coupled with significant stimulus spending, not indicated on this graph. 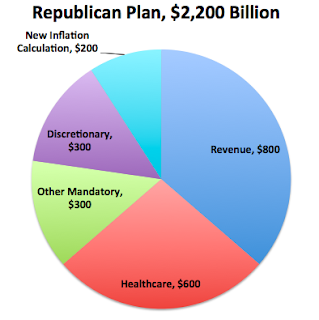 The Republicans reject Bowles-Simpson, and think that’s a mistake, but nobody asked me. They talk about making big sacrifices to reduce the deficit but there remains the question of details that they haven’t provided (on Fox News Sunday last week) regarding deductions, that the Democrats call ‘tax loopholes’.
Bowles-Simpson is serious medicine for a serious problem. The other plans are window dressing, puffed by political posturing and in my opinion both the Obama and Republican plan are inadequate and will prolong America’s financial pain – with recessions and depressions for the next decade.
Graphs h/t The Atlantic