Abuse of power, flagrant disregard for law, rules, precedent and the Constitution have been the hallmark of the Barack Hussein Obama Administration over the past year. It extends to the Democrats in the US Senate as well. The White House has threatened to ram through radical health reform by abusing the budget reconciliation process. That would mean a new chapter on corruption for the history books. For you history buffs who have read about the Tea Pot Dome Scandal of the Harding Administration or the Watergate Scandal of the Nixon Administration – they’re nothing in comparison.

The president and the Democratic Congress have decided to spend America into oblivion. But nothing in the 1974 budget act, or the amendments made to it since, can be construed as applying to the thousands of pages of legislation to revamp one-sixth of the economy.
In response, House Minority Leader John Boehner said the president had “crippled the credibility” of the health “summit” planned for Thursday “by proposing the same massive government takeover of health care based on a partisan bill the American people have already rejected.” 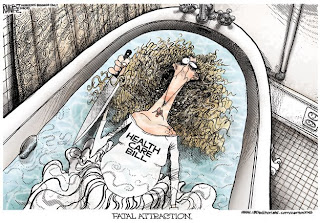 The ‘reconciliation process’ (1974 Budget Act) is the “Chicago Response” to the will of the American People, who don’t want the draconian, horribly expensive, impossibly damaging Health Care Bill. It brings to memory the SEIU thugs beating up patriotic Americans at town hall meetings. It brings to mind  thuggery we’ve seen in Chicago Politics for the past century.
There is no possibility of bipartisanship when the “Chicago Response” or “Chicago Rules” are the method chosen by the Administration to attempt to resurrect a healthcare bill that the American people DO NOT WANT.
The American people want healthcare reform.
(1) Portability
(2) Deal with pre-existing conditions
(3) Open the markets to all insurance companies
(4) Tort Reform
They don’t want the two thousand page bill that gives preferences to one state over another (based on their votes for Democratic candidates), they don’t want the “public option” and they don’t want to impart the same callous standard of care administered presently by the Veteran’s Administration to be dumped on the American public.