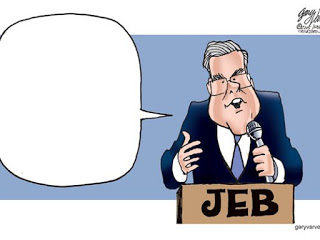 The Republican Convention is about a week off and there are still elements within the party who would rather not see Donald Trump become the nominee. The mainstream media broadcasts their whining because it makes the opposition (as represented by a scoundrel) sound more credible.
I have a modest proposal. Draft Jeb!
It’s true that Jeb! spent $100 million to rack up four primary delegates, but as the dim bulb of the Bush Family, he represents ‘Hillary Lite’, an alternative to Hillary Clinton that incorporates all of her ideas in a package that is more conservative to the Republicans who hope to ride Jeb!’s coat tails for four years and feed at government largess.
Best of all, nobody recalls Jeb!’s primary campaign, what he promised, what he said that he’d accomplish, etc. Nobody but friends and family showed up for his rallies. Those who did come, wanted a picture standing next to his brother.
Jeb! would be everything that the Never Trump people want in Washington.