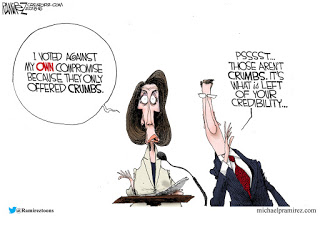 Facebook
Twitter
Pinterest
WhatsApp
Entertainment
I find the Democrat Party to be the highlight of my day. I’ll come out and say it. I am entertained. It’s important to look for the comic relief in life and while Barack never delivered the goods, Rep. Nancy (Nasty) Pelosi D-CA brings it.

It’s not just the face stretched to the splitting point and the weird facial ticks that likely come from that. Add in the mumbled talking points which are the precise opposite of her talking points only a year or two ago. She’s funny. She fits in with the freaks and misfits who populate her district in California. In a perverse way, I’d say that she does represent them.
Congress people take her seriously because she’s been able to steal a LOT of money and that is a talent that they don’t want to see go to waste. The crumbs from the Pelosi table are nothing to turn your cheek at.
She needs to run on the Democrat ticket. She really does. She could self-fund in the same way that Oprah could. All she’d need to do is liquidate a few mansions.
Meanwhile in Syrian Kurdistan
CNN-Turk  reported that the Turkish invasion managed to “neutralize” 1,068 elements of PYD/PKK (Syrian and Iraqi Kurds) and ISIL (Islamic State) in its Afrin operation. The military announced it liberated at last three villages around Afrin City. They need to report something positive.
The Syrian Kurdish People’s Protection Units denied the Turkish claims.
Turkish airstrikes have resumed following the shooting down of a Russian warplane in Idlib last weekend. A Turkish armed forces statement claimed that the air strikes destroyed 19 targets including ammunition depots, shelters and gun positions
On 10 February, Kurdish fighters near the northern Syrian town of Afrin shot down a Turkish army helicopter, Turkey’s president Erdogan announced the loss. The Turkish military said two soldiers on board the helicopter died.

The Turks are moving still more armor into the Afrin area based on knowledgable sources and they’re preparing to mount “the mother of all offensives” to seize the empty Syrian/Kurdish city once and for all. This is the third “mother of all offensives” that they’ve launched since Operation Olive Branch began. As some of this blog’s readers have noted, it’s embarrassing to the Turks that the entire Turkish combined arms military doesn’t seem to have the capacity to mop up one empty city.
Reuters reported that the Syrian Kurds in Afrin are receiving some indirect help from the Syrian government. The Syrian army is allowing Syrian Kurds from outside Afrin to reinforce the canton to fight the Turks. A Turkish victory in Afrin is not certain and casualties are increasing.
Arab media sources reported that the al-Qaida faction in Idlib, formerly the al Nusra Front, and the Islamic State continue to fight for control of Idlib.
Israel’s Chip in the Game
On 10 February, Israel launched heavy air strikes against multiple Syrian and Iranian targets in Syria. The wave of airstrikes came after Israel intercepted an Iranian drone that had entered Israeli airspace.
The Israelis identified some of the targets of the retaliatory airstrikes. With a map distributed late Saturday night, 10 February, the Israel Defense Force (IDF) specifically identified long-range SA-5 and medium-range SA-17 anti-aircraft missile batteries as targets of its strikes, along with a long-range SA-2 missile defense system, all of which had been deployed around Damascus. Syria also fired SA-3 and SA-6 systems at the IDF aircraft.
The IDF said it destroyed the drone’s Iranian launching site along with four additional Iranian positions and eight Syrian sites, including the Syrian military’s main command and control bunker.
The Syrian Observatory for Human Rights (SOHR), which monitors the war in Syria through a network of activists on the ground, posted on the 11th that at least six Syrian troops and non-Syrian allied militiamen were killed in the airstrikes.
The Syrians downed an Israeli F-16 as it was returning from its attack mission on Saturday. The aircraft crashed in Israel near Harduf. The IDF reported that both pilots aboard the F-16 were safe, though one was seriously wounded.
Intelligence Minister Katz warned the Syrians and Iranians. Israel’s intelligence minister said on Army Radio, “They, and we, know what we hit and it will take them some time for them to digest, understand and ask how Israel knew how to hit those sites…These were concealed sites and we have intelligence agencies and the ability to know everything that is going on there and yesterday we proved that.”
The attacks demonstrated several significant points to the Syrians and Iranians. Most obvious is that the IDF can defeat five Syrian air defense systems. Syria apparently did not use the S-300 system.
Syrian air and air defense forces will take pride in downing one IDF aircraft, but they have been a disappointment to the Soviets since the era of Marshal Ogarkov, Chief of the General Staff during the Lebanon War of 1982. In June 1982, the IDF destroyed about 80% of all Syrian fighter aircraft and all modern (at the time) Soviet-supplied surface-to-air missile sites in an afternoon. Ogarkov flew to Syria to conduct the post-mortem.
The Syrians must be a disappointment to the present Chief of the General Staff, Russian General Gerasimov as well.
The IDF gave the Syrians and Iranians a glimpse at the depth and scope of Israeli intelligence about their activities. The IDF also backed up Prime Minister Netanyahu’s warning that Israel will not permit the Iranians to consolidate their position in Syria.
Almost not mentioned is that last year the Israelis destroyed that Iranian base which imagery showed to be under construction south of Damascus. If the Iranians rely on the Syrians for air defense protection, they will be unable to build an infrastructure in Syria.
However, if Syrian air defenses improve and the IDF loses dominance in the air, the Iranians will stay in Syria and the threat to Israel will increase significantly. The Israelis cannot survive a war of attrition.
Israeli attacks have become more frequent, larger and more deadly since last summer. As the Syrian fighting declined last year, the Iranians appear to have picked up the pace of their expansion into Syria and the pace of attempted deliveries to Lebanese Hizballah.
The Israelis are a pre-war stage of activity with the Iranians and Lebanese Hizballah. They are testing weapons, reaction times and effectiveness. The action-reaction cycle is heading towards larger clashes.
Egypt

On 9 February, Egyptian forces launched Operation Sinai 2018, a major joint operation that targets Islamic militants in the Sinai Peninsula and in parts of the Delta and Western Desert.
Egypt’s air force struck 66 militant targets in northern and central Sinai on Feb. 10, Reuters reported. On the ground, special forces, working with police, conducted raids inside cities in Sinai to seize militants, the Egyptian military said. They claimed to have killed 16 militants.
Naval units from a Mistral helicopter carrier have continued to comb the coast of Arish, the capital of North Sinai governorate, while police and coast guards intensified security measures and patrols.
Security forces also uncovered and destroyed a media center with computers, wireless communication equipment, books and documents related to jihadi ideology. In addition, six farms used to grow illegal narcotics were found and destroyed.
This is one of the few times the Egyptian Mistral helicopter carriers have been mentioned in open sources as engaged in supporting counter-terrorism operations.
President Al Sisi gave the armed forces 90 days to eliminate the terrorists responsible for the attack last November that killed 300 civilians in a North Sinai mosque.
Al Sisi wants the terrorist threat reduced before Presidential elections, which are to be held between 26 and 28 March.
Author’s Note: I find it interesting that Egypt operates two French made Mistral Class helicopter carriers while Britain is decommissioning its only two amphibious warfare ships and is eliminating 2,000 Royal Marine Commandos from the force of 25,000. Who would have ever thought that the Royal Navy would be coming in second to the Egyptian Navy? Maybe they’re are hoping that the Egyptians will pitch in and help them if times get hard in the British Isles?

I haven’t heard whether the British outreach to sexual deviates and Muslims within its population to join the military have been successful. If that doesn’t work, they may have to resort to ‘press gangs’ to fill the ranks.