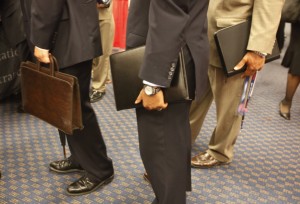 Facebook
Twitter
Pinterest
WhatsApp
Have any of you attended a job fair recently? It’s pathetic — I mean really pathetic.  I had a meeting with attorneys flying in to Los Angeles at a hotel near Los Angeles International Airport. When I arrived, there was a very long line stretching from the first floor, and winding through the second floor. Somewhere on the order of three hundred men and women wearing business suits cued up to get into a job fair for military veterans that was being held in a banquet hall.

Being a veteran, I thought that I’d take a look and see who was hiring. WalMart and McDonalds were taking applications for immediate employment and invited resumes. The US Border Patrol had a big presence, though they weren’t hiring immediately, they did suggest that they’d hire soon. Boeing was there hiring jet engine mechanics and electronic specialists who’d repaired their products when they were in the service — and that’s about it. There were people from a nationwide realty office who were trying to get former service men and women to sell real estate (no, I’m not kidding) and the rest of the people there were from outfits like ITT Institute who were selling education programs.

(Reuters) – The number of Americans filing new claims for unemployment benefits [in June] unexpectedly rose last week, according to a report on Thursday that could reinforce fears the labor market recovery has stalled.

Initial claims for state jobless benefits increased 1,000 to 427,000, the Labor Department said. However, economists polled by Reuters had forecast claims dropping to 415,000 from a previously reported count of 422,000. The rise kept first-time claims perched above the 400,000 mark for the ninth week in a row. Analysts normally associate a level below that with steady job growth.

Fueling concerns about job creation, the U.S. government said on Friday the U.S. unemployment rate ticked up to 9.1 percent in May while nonfarm employers added a paltry 54,000 workers to their payrolls.

The number of people still receiving benefits under regular state programs after an initial week of aid slipped to 3.68 million in the week ended May 28 from 3.75 million. Economists had expected so-called continuing claims to edge down to 3.70 million from the previously reported 3.71 million.

Welcome to the ObamaNation! Do you remember the Summer of Recovery? Or the Fall of Recovery? Or the Spring of Recovery? Austan Goolsbee, Chairman of Obama’s Council of Economic Advisors resigned last week. He replaced Christina Romer, who also resigned. I suspect that Obama is looking for a new advisor who will tell him what he wants to hear rather than how the cow ate the cabbage. So there is ONE job opening in America.