It’s all about choice 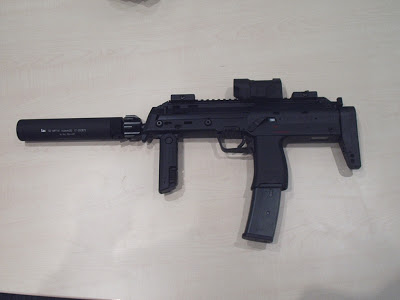 Facebook
Twitter
Pinterest
WhatsApp
In a difficult world where situations can call for an aggressive defense, you need to find something that works for you.
This is my official endorsement for the Heckler and Kock MP7A1. I carried the H & K G-36 Commando and my unit was the first in the United States to be so equipped. I thought that it was an exceptionally fine weapon until the MP7A1 was introduced. There are still situations where the G-36 has advantages, but for a personal defense weapon, it’s going to be a long time before somebody tops the MP7. It’s clearly superior to the much-loved MP5-K.
The MP7 essentially operates like a scaled-down rifle with the same short stroke piston style action as the G-36. It fires a specially designed, armor-piercing round with a muzzle velocity nearly as high as that of the 5.56×45 mm NATO cartridge used by many modern rifles. This ammunition is unique among submachine guns in that the bullet is made almost entirely of a hardened steel penetrator instead of softer copper or lead designed to defeat body armor. The ammunition is virtually exclusive to the gun. VBR of Belgium produces a 4.6x30mm 2-part controlled fragmenting projectile that is claimed to increase the content of the permanent wound cavity and double the chance to hit a vital organ.
The weapon allows a conventional 20-round, 30-round, or 40-round box magazine to be fit within the pistol grip (the 20-round magazine being comparable in size to a 15-round 9mm magazine, while the 40-round magazine compares to a 30-round 9 mm magazine). The weapon features an ambidextrous fire-select lever and rear cocking grip. It has an extendable stock and a folding front grip; it can be fired either one-handed or two-handed.
It can also be fitted with a silencer for situations where you don’t want to announce your presence.