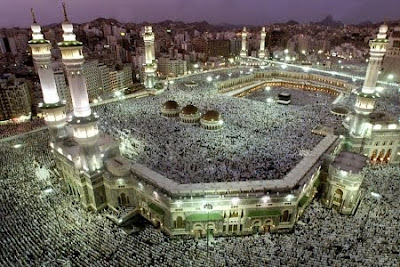 The Grand Mosque, Mecca, Saudi Arabia, during the haj.
لإسلام
During the 20th Century there was a remarkable revitalization in the Islamic world after several hundred years of subordination to Western Nations, Western Power and Western Influence. As a result of this change which carries forward to today, Muslims have been undergoing change in many levels of their lives. Change notwithstanding, the religion, Islam, continues to retain a powerful hold upon the lives of its adherents. It is a hold stronger and broader than Christianity can claim.
Christianity, unlike Islam, has passed though a number of historical experiences: The Renaissance, the Reformation, the Age of Reason, the scientific revolution and the appearance of secular philosophies such as Marxism and logical positivism. Consequently, Christianity has lost its importance as the foundation of thought and action in most spheres of human endeavor. From a political perspective, it is summed up by the separation of church and state, a concept that is completely alien in Islam.
Islam hasn’t undergone any of the changes that Christianity experienced except to the extent that it echoed from the West. The current fundamentalist revival, evidenced in “terrorist nations” and in groups such as Al Qaeda is in part, a reaction to the West and the cultural consequences of adopting its path to modernization. The material benefits of technology have only reached a few people in many Islamic Nations and it consequently widened the socioeconomic gap. More than ever, Islamic masses feel their poverty and aroused by any promise of reform. Many young people seek an ethically based social order which they believe in as a principle of Islam. It’s a concept of communal sharing and solidarity upon which the faith was founded 1400 years ago.
Power and influence in the Islamic world is often based on the charisma of a religious leader. The caliph (or head of state) rules under God and is obliged to impose the Holy Law. The Shari’a is (in theory) infallible and immutable doctrine the whole of religious, political, social and private life of believers and non-believers living under Muslim rule. The concept of one-man/one-vote when selecting the ultimate leader of a nation makes no sense within Islam because the leader is chosen by God. Subordinates may be subject to the whims of voters, but ultimate authority is theocratic.
Where Western nations demand different things from their government, politically, Muslims require JUSTICE. It is a pejorative term, but one fundamental to understanding how Muslims look at the world they live in.
While speaking in Egypt, Dear Leader proclaimed that America was one of the largest Muslim nations on Earth. Yes, he misspoke, however his efforts to support Islamic societies and nations at the expense of others have shown his bias. His motivation, was JUSTICE, and was accompanied by profound apologies for the conduct of America and Americans. Dear Leader understands the Five Pillars of Islam. He was a Muslim when he was young because only a Muslim can attend madrassas in Indonesia. He was schooled on the Qur-an and on the concept of justice and its profound importance in the political world of Islam.
Depending on the response to this blog post I will either post more on Islam for the sake of understanding the faith – Or I won’t.