Is Truth an endangered species? 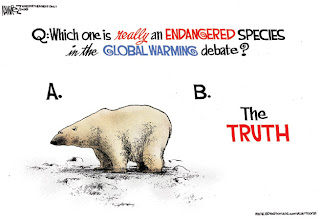 On Day 2 of the Copenhagen climate conference, the United Nations announced that the current decade is the warmest on record.

Yes, it’s a LIE!
You know, the same thing that happens when Barack Hussein Obama reads from his teleprompter. Lies are not exactly new to the bloggers on the Internet.

On Tuesday, the U.N.’s World Meteorological Organization released a preliminary report that claims the 10-year period from 2000 to 2009 is the warmest since records began in 1850.

How can serious scientists compare data from record keeping in 1850 to modern record-keeping? The report says the data are culled “from networks of land-based weather and climate stations, ships and buoys, as well as satellites.” (IBD)

It might be rude to challenge Barack Hussein Obama (famous quasi Imam, defender of the faith, etc.) – BUT –  How many satellites, ships and buoys were used in 1850? How do the land-based weather stations match up? Are they the same set of stations used since 1850, or have stations been added and dropped through the decades? Have there always been enough stations to adequately represent the global temperature? A global map of weather stations shows they are highly concentrated in the U.S. and Europe. Their presence in Asia, Africa and South America is almost nonexistent. How can their readings from only a portion of the globe be indicative of the entire planet? And what about the placement of weather stations? Developed areas create heat islands that register higher temperatures, which aren’t relevant to climate or global temperatures. How many stations located in undeveloped areas 150 years ago are now surrounded by growth and are recording distorted temperatures?

A look at temperatures over the last 10,000 years as determined by ice cores, not weather stations, shows that the planet has gone through much warmer eras than it is now experiencing.

Also inconvenient to the U.N.’s report is the scandal at the Climatic Research Unit at the University of East Anglia, one of three climate data analysis centers. E-mails between researchers recently made public reveal: a pattern of manipulation of the data; an effort to crush scientists who dissented from the “consensus” that man is warming the planet; and the possible defrauding of the taxpayers who have funded their research. (IBD)

Sort out the lies from the truth – THEN tell us what is left and allow other scientists to review data so that a realistic debate can be formulated.

I know, I know, Barack Hussein Obama doesn’t care about the inconvenient truth. He sincerely wants to drive the America he resents on the rocks. The plain truth is that whatever he signs can be repudiated once he’s out of office.