DISCLAIMER: I have no idea why Obama granted Interpol diplomatic immunity in the United States. I am not an apologist for Barack Hussein Obama or for his administration or for its consistently strange policies.
Interpol doesn’t need diplomatic immunity.
There is a lot of confusion about what Interpol is and isn’t. Interpol, whose full name is the International Criminal Police Organization – INTERPOL, is an organization facilitating international police cooperation. It was established as the International Criminal Police Commission in 1923 and adopted its telegraphic address as its common name in 1956.
In 2008, the Interpol General Secretariat employed a staff of 588 (in Lyon, France) representing 84 member countries. Its membership of 188 countries provides finance of around $59 million through annual contributions. The organization’s headquarters are in Lyon, France. In the photo (below) taken inside the General Secretariat you’ll me standing at right. 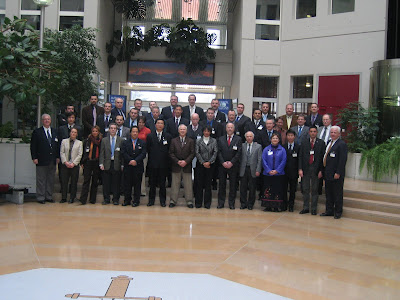 Interpol does not employ a staff of law enforcement officers that investigate crimes on its behalf. It is ONLY an information clearing house that provides coordination and training on issues of international concern.  If a nation other than the United States wished to place a law enforcement officer on its embassy staff inside the US, it could do so and they (as accredited diplomats) would have immunity under the rubric of legal attaches.

So why the change in status?
I am perplexed.