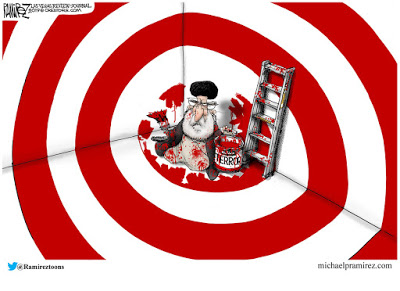 In a press conference on Tuesday, 9 July, Ms. Lam said the government’s work on the bill had been a “total failure”.

“So I reiterate here, there is no such plan. The bill is dead.”

Except that it may not be. The BBC and other news services wrote that she did not use the appropriate legal terminology to signify that the bill had been withdrawn. Her language did not provide that assurances that the protestors demanded and the bill remains on the legislative agenda through 2020. While it may be removed from that agenda, it has not been removed yet.
The Beijing government is not embarrassed by the Hong Kong protests. At the Foreign Ministry press session on 8 July, Spokesman Geng Shuang bragged about China’s hands-off reaction to the protests as proof of China’s commitment to the “one country, two systems” policy. He cited Hong Kong’s economic growth in the past 22 years as “a policy success”.
The communist leaders consider the Hong Kong disturbances as proof that China respects the one country, two systems doctrine and will not intervene to prevent or suppress public demonstrations. Public references to China’s hands-off reaction are aimed at Taiwan.
The Odious Iran
The International Atomic Energy Agency (IAEA) confirmed that Iran has enriched uranium beyond a 3.67% purity limit specified in the Joint Comprehensive Plan of Action (JCPOA) agreement with the major powers.

The IAEA announcement confirms a statement by Behrouz Kamalvandi, a spokesman for Iran’s nuclear agency. “At the moment our enrichment is at around 4.5%,” Kamalvandi said. He did not elaborate.

In coming weeks, Iran has vowed to increase enrichment to at least 5%. Experts state that U-235 enrichment at this level is suitable for nuclear reactor fuel for power generation. Weapons grade U-235 is enriched 90%.
While attempting to persuade European nations to provide sanctions relief, Iran’s main source of leverage is uranium enrichment. Thus far, it has not worked.
Sanctions are a form of collective punishment. Popular hardship is managed by domestic policymakers. National security issues are handled in a different channel. For the sanctions regime to achieve US objectives, the two channels must merge so that domestic hardship becomes a national security threat by reaching proportions so great that the leadership falls or changes policy. Iran seems far from either end state. China and Russia are likely to ignore sanctions and to continue to do business with Iran unless Iran engages in open warfare beyond downing the US drone and covertly damaging oil tankers. If Iran openly attacks a US ship, it’s an act of war and neither China nor Russia want a piece of that. It does them no good.
Venezuela is the best recent example of the limits of severe economic conditions to alter national security policy or leadership. As long as the soldiers and police remain loyal to the incumbent leadership, the system survives. So Iranian leadership is likely to survive the situation because the Supreme Leader is Allah’s mouthpiece and he’s infallible, even if some of his underlings (who are disposable) are not.
North Korea 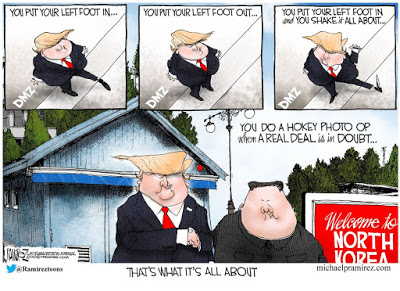 President Trump and Kim Jong Un both needed the photo op, and it worked.
The Norks are unlikely to give up their nuclear weapons in the foreseeable future despite Chinese assurances of security guarantees.
At the same time, these sorts of meetings and assurances of friendship between President Trump and Chairman Kim do ratchet down the tension. The hard liners in North Korea don’t like it and neither does the US Military Industrial Complex. But it’s good for all parties at the moment.
Cyprus, Turkey, and Oil
More tension off Cyprus. Turkey’s second drill ship arrived off the coast of Cyprus on 8 July and is set to begin drilling for oil and gas. The Yavuz, will begin drilling off the Karpasia peninsula this week. It follows the Fatih, which arrived in June.

Last month the European Union (EU) warned the Turkish government to stop its “illegal” activities or face sanctions. Turkey, taking a cue from China, ignored the EU and insists that it is drilling within its continental shelf.
The Republic of Cyprus, the Greek half of the island, is a member of the EU and claims jurisdiction of the entire island and its 200 nm exclusive economic zone. Only Turkey recognizes the Turkish Cypriot regime in northeastern Cyprus and claims the waters off the northeast are within Turkeys exclusive economic zone.
Turkey will use navy and other assets to protect its drill ships. For now, the Nicosia government is pursuing legal remedies in court, which probably will be unenforceable against Turkey without some form of coercion.
Russian SAMS in Turkey
Turkey is preparing to receive the first deliveries of the S-400 system this week.Turkish President Recep Tayyip Erdoğan said on 8 July that preparations are proceeding on schedule, without disclosing a definite arrival date.

“Right now, the preparations for the arrival continue. It would be right if you do not push us on a precise date. The shipping is still proceeding. There are also certain dates [on which] we came to terms with [Russia],” Erdoğan said.

The US warned Turkey a month ago that the arrival of the S-400 air defense system would result in a termination of the F-35 fighter program for Turkey unless the Russian deal was canceled by 31 July. US agencies already have restricted access to the aircraft by Turkish pilots. They cannot train on or fly F-35s in the US that Turkey has already purchased. Parts manufacture also will be removed from Turkey.
Turkish President/Sultan-for-life Erdogan is stressing NATO, which is a perennial strategic goal of the Russians.

Now that business is out of the way… 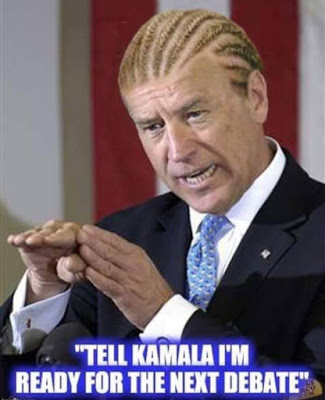 The real question of the day on the run up to the next Democrat debates is whether or not Slow Joe Biden is black enough.

He now self-identifies as a black man and he has just a smidgeon less negro blood than Spartacus Booker.

Will that be enough?

Or does he need to get a tuck-and-roll job like Bruce Jenner so that he can be a ‘credible female’?

I think that the next Democrat debates need to be a sort of coming out party. The Butt guy can come out and self identify as a straight woman. Beto can come out as a Mexican lesbian. It would be one heck of a show and it could upset the polling for some time to come.

Let the freak show go on! I tell you, it’s must-see tv.