In Search of the Red 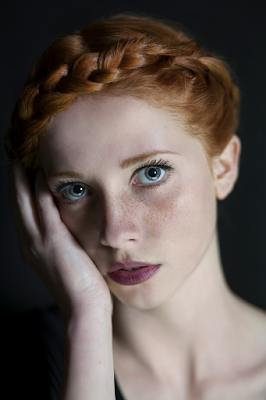 Because of the many posts at the Daily Timewaster, I decided to explore the world of redhead women with freckles and blue or green eyes. Only two percent of the population on Earth has that combination. The recessive gene that causes red hair, MC1R, is a genetic mutation, but I do not suggest that ginger hair’d people are “mutants”.

Scholars have debated the origins of red hair (and the gene that underpins it). According to some, the gene for red hair is inherent to the Celts, while others claim it to be a genetic trait specific to the Norsemen, being brought to the British Isles during the Viking Age.  A third category of historians and scientists agree on a common Celto-Germanic genetic trait, rather than a separate origin for the gene. This latter group would seem to be ‘people pleasers’ rather than ‘nit pickers’.

Red hair is the result of a recessive genetic trait which has been caused by a series of mutations in the melanocortin 1 receptor (MC1R), a gene which is located on chromosome 16. Being a recessive genetic trait means that both parents must cary the gene in order for their children to be born red haired.  There are far many more carriers than people who are born with red hair.

Did the Vikings bring the red hair gene to the British Isles?
Professor Donna Heddle explained that the perception according to which the invading Viking raiders of the British Isles were blond is nothing more but a mere misconception. According to the same theory, the Norsemen were likely red headed. This may be true, at least in part. Not that many Viking warriors were naturally blond, indeed. In fact, blond hair was very much sought after in Viking Age Scandinavia and many Norsemen dyed their hair blond.

On this note Professor Donna Heddle stated for The Scotsman: ‘The perception that the Norse were blond is nothing more than a prevalent myth. Genetically speaking, the chances of them having blond hair weren’t that likely. The chances are that they would have had red hair. Interestingly, if you look at where red hair occurs in the world you can almost map it to Viking trading routes.’ (map above)

If we are to take a look at the areas in Ireland where the Norsemen settled, we can also see the highest concentration of red haired Irish people. The Viking warriors who settled coastal parts of both Scotland and Ireland were mainly of Norwegian descent (shortly followed by Danish Vikings as well).
Norway may well be the actual place of origin for the red hair as the gene was successfully linked to the paternal Y-DNA haplogroup R1b-L21, which includes one of its subclades defined as R1b-M222 — one that is very common for both northwestern Ireland and Scotland.
Distribution of Y-DNA (paternal lineage) R1b haplogroup in Europe. Image source: www.eupedia.com (above)

RED HAIR’D RAIDER
A famous Norwegian Viking by the name Eiríkr Þorvaldsson (Erik Thorvaldsson),  born in the Jæren district of Rogaland, southern Norway in mid 10th century, subsequently became renowned as Erik the Red, because of the colour of his hair and beard. He is recounted in the Icelandic sagas as the first Norse settler in Greenland.

The consensus is that the Vikings own the red hair genetic mutation and distributed it far and wide in  their travels and raids, where those genes were spread in true berserker fashion.
And if you wish to read more: