Harry Reid did something right–17 years ago 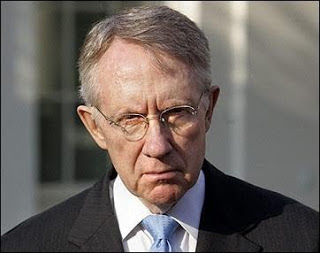 We need to use the LEGENDARY Way-Back Machine to transport ourselves to 1993.

This is what the ranking Senate Democrat, Harry Reid (D-NV) said, “I don’t know how anyone of Hispanic heritage could be a Republican,” at a campaign event with Latino supporters earlier this week.


Way back in 1993, Harry sang a different song on the floor of the US Senate, declaring loudly that illegal aliens (90% Hispanic) are scam artists and free loaders.

In 1993, Senator Reid’s office released the following statements concerning illegal immigration:
“In response to increased terrorism and abuse of social programs by aliens, (I) today introduced the first and only comprehensive immigration reform bill in Congress. Currently, an alien living illegally in the United States often pays no taxes but receives unemployment, welfare, free medical care, and other federal benefits. Recent terrorist acts, including the (first) World Trade Center bombing, have underscored the need to keep violent criminals out of the country.”


But in 1993, Senator Reid said that the U.S. open door policy is being abused at the expense of honest, working citizens.

“We are a country founded upon fairness and justice. An individual in real threat of torture or long-term incarceration because of his or her political beliefs can still seek asylum. But this bill closes the door to those who want to abuse America’s inherent generosity and legal system.”

“Our borders have overflowed with illegal immigrants placing tremendous burdens on our criminal justice system, schools and social programs. The Immigration and Naturalization Service needs the ability to step up enforcement. Our federal wallet is stretched to the limit by illegal aliens getting welfare, food stamps, medical care, and other benefits often without paying any taxes.”

“Safeguards like welfare and free medical care are in place to boost Americans in need of short-term assistance. These programs were not meant to entice freeloaders and scam artists from around the world. Even worse, Americans have seen heinous crimes committed by individuals who are here illegally.”
(emphasis added)

The statements quoted above are from a press release issued by Reid’s office on August 5, 1993.

Specific provisions proposed by Harry Reid in the Immigration Stabilization Act include:

* Increases penalties for failing to depart or re-entering the United States after a final order of deportation order. Increases maximum penalties for visa fraud from five years to 10 years.

* Adds “alien smuggling” to the list of crimes subject to sanctions under the Racketeer Influenced and Corrupt Organizations (RICO) Act.

* Expands the categories of property that are forfeited when used to facilitate the smuggling or harboring of illegal aliens.

* Clarifies that a person born in the United States to an alien mother who is not a lawful resident is not a U.S. citizen. This will eliminate incentive for pregnant alien women to enter the United States illegally, often at risk to mother and child, for the purpose of acquiring citizenship for the child and accompanying federal financial benefits.

* Mandates that aliens who cannot demonstrably support themselves without public or private assistance are excludable. This will prevent admission of aliens likely to be dependent on public financial support. This requirement extends to the sponsor of any family sponsored immigrant.

Today’s antics as a tool of the radical left are a stark departure from the old Harry Reid. Who is pulling your strings, Harry? Is it the same people who tell obama what to say? What happened to the old Harry who cared about America?