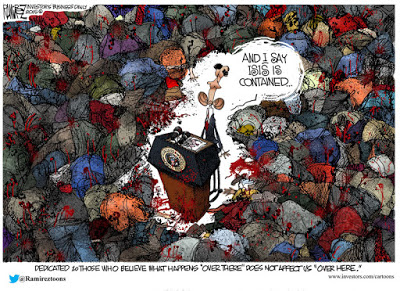 Facebook
Twitter
Pinterest
WhatsApp
There are groups of Arab peoples who we should actively be relocating and protecting.  They are the families of the Kurds who have fought against ISIS and are injured in combat. These people are much easier to vet than the herd of Syrian refugees who are marching into Europe. Special Forces operators can do it for us. We can trust the word and faith of our own, who are among the best and most closely tested of all Americans.
The families of Syrians who were vetted and trained by a US Intelligence Agency to fight against Assad can also be relocated to the US with confidence. These people are known personally to our people.  They swore to lay down their lives to free Syria from a dictator. Many of them are Christians, which does not endear them to Mr. Obama, so I doubt their chances at justice.
There is a significant precedent to doing this. We did it in Vietnam, we did it in Afghanistan and Iraq. There are debts that we incur to these people and we occasionally need to evacuate either them or their families (not refugees, but EVACUEES).
Thy are not our enemies. They are our loyal friends, and religion is not an issue. Bearing true faith and devotion is the issue.
The next issue is that of Christians in Islamic war zones. They have a BETTER founded fear of persecution than the Muslims do. The liberal left keeps diverting this key element from the debate in America. They want to make it about unequal treatment for Christians. That isn’t the point.

There is a way to pick the right people for our nation to help. It is based on THEIR willingness to work with us to find a solution. I don’t think that President Obama understands any of this.
Barack clearly showing himself to be the petulant child that we have known him to be. He’s the narcissistic buffoon we have witnessed in action for the past seven years.

He’s is presently incompetent to the point of making himself a national joke. Obama’s army of handlers need to keep that teleprompter in front of him so that he doesn’t say what he’s thinking.