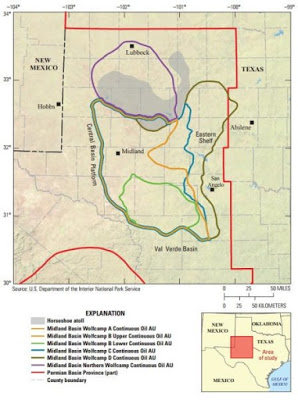 The energy initiative that President Trump is pursuing calls for the US to be energy self sufficient. The recent disclosure from USGS of the vast untapped resources in the Wolfcamp shale makes that goal more achievable.
The Wolfcamp shale in the Midland Basin portion of Texas’ Permian Basin province contains an estimated mean of 20 billion barrels of oil, 16 trillion cubic feet of associated natural gas, and 1.6 billion barrels of natural gas liquids, according to an assessment by the U.S. Geological Survey. This estimate is for continuous (unconventional) oil, and consists of undiscovered, technically recoverable resources.

The estimate of continuous oil in the Midland Basin Wolfcamp shale assessment is nearly three times larger than that of the 2013 USGS Bakken-Three Forks resource assessment, making this the largest estimated continuous oil accumulation that USGS has assessed in the United States to date.

“The fact that this is the largest assessment of continuous oil we have ever done just goes to show that, even in areas that have produced billions of barrels of oil, there is still the potential to find billions more,” said Walter Guidroz, program coordinator for the USGS Energy Resources Program. “Changes in technology and industry practices can have significant effects on what resources are technically recoverable, and that’s why we continue to perform resource assessments throughout the United States and the world.”

Although the USGS has assessed oil and gas resources in the Permian Basin province, this is the first assessment of continuous resources in the Wolfcamp shale in the Midland Basin portion of the Permian.
Continuous oil and gas is dispersed throughout a geologic formation rather than existing as discrete, localized occurrences, such as those in conventional accumulations. Because of that, continuous resources commonly require special technical drilling and recovery methods, such as hydraulic fracturing.
The question of what price gasoline would have to reach to make this oil and gas resource both recoverable profitable is one that I can’t answer. I’m sure that there are studies afoot to make that determination.

There is another question and one possibly more sensitive. Do the Saudis already own the oil in the Midland Basin Wolfcamp shale, or are they negotiating to buy it?