the gold in them thar hills 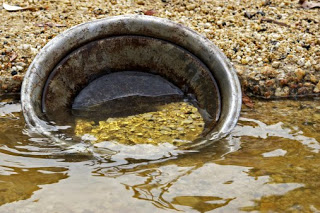 Facebook
Twitter
Pinterest
WhatsApp
I realize that I may have too much time on my hands from time to time, but when you think about it, the molten Earth sifted out materials based on weight the the iron (and presumably the gold) migrated to the core, where it remains. Which begs the question of why there is so much gold (and other related minerals) on the surface. That’s answered in part in an article from the journal, Nature, from back in 2011.
Ultra high precision analyses of some of the oldest rock samples on Earth by researchers at the University of Bristol provides clear evidence that the planet’s accessible reserves of precious metals are the result of a bombardment of meteorites more than 200 million years after Earth was formed.

Estimates hold that there are enough precious metals in Earth’s core to cover the entire surface of  with a four-meter thick layer.

“The removal of gold to the core should have left the outer portion of Earth bereft of bling. However, precious metals are tens to thousands of times more abundant in Earth’s silicate mantle than anticipated. It has previously been argued that this serendipitous over-abundance results from a cataclysmic meteorite shower that hit Earth after the core formed. The full load of meteorite gold was thus added to the mantle alone and not lost to the deep interior.”

To test this theory, Dr Matthias Willbold and Professor Tim Elliott of the Bristol Isotope Group in the School of Earth Sciences analyzed rocks from Greenland that are nearly four billion years old, collected by Professor Stephen Moorbath of the University of Oxford. These ancient rocks provide a unique window into the composition of our planet shortly after the formation of the core but before the proposed meteorite bombardment.

The researchers determined the tungsten isotopic composition of these rocks. Tungsten (W) is a very rare element (one gram of rock contains only about one ten-millionth of a gram of tungsten) and, like gold and other precious elements, it should have entered the core when it formed. Like most elements, tungsten is composed of several isotopes, atoms with the same chemical characteristics but slightly different masses. Isotopes provide robust fingerprints of the origin of material and the addition of meteorites to Earth would leave a diagnostic mark on its W isotope composition.
Dr Willbold observed a 15 parts per million decrease in the relative abundance of the isotope 182W between the Greenland and modern day rocks. This small but significant change is in excellent agreement with that required to explain the excess of accessible gold on Earth as the fortunate by-product of meteorite bombardment.
Dr Willbold said: “Extracting tungsten from the rock samples and analyzing its isotopic composition to the precision required was extremely demanding given the small amount of tungsten available in rocks. In fact, we are the first laboratory world-wide that has successfully made such high-quality measurements.” “Our work shows that most of the precious metals on which our economies and many key industrial processes are based have been added to our planet by lucky coincidence when the Earth was hit by about 20 billion billion tons of asteroidal material.”

Therefore, it might be worth mining the asteroid belt?  Sci-Fi writers take note.