Or you can file it as:
Don’t ask, don’t tell (expanded).
or maybe
“Haze Gray and Underway”
or maybe
“Life on the Carlskrona”

CBS NEWS Story (LINK) No, I’m not making this up.

During off-duty hours, the sauna is at the heart of socializing on the ship. Spanish, German and Norwegian officers meet their Swedish colleagues there after long days in the Indian Ocean searching for pirates, responding to their attacks and planning escorts for ships.


Of course, in the waters off the sweltering Somali coast, sailors can work up a good sweat by simply doing nothing. Temperatures often hover around 100 degrees (37 degrees Celsius).


Taking a steam together is an essential way of getting to know someone in much of Scandinavia, said Mika Raunu, a sailor in the Finnish navy. It’s in the same tradition of Scandinavian egalitarianism that sees officers sharing rooms with lower-ranking sailors.


It also has led to a few cultural misunderstandings.


Lt. Cmdr. Carl Sjostrand told of a Swedish captain who invited a U.S. admiral to meet his senior officers after a formal ship’s dinner. The American was led down to the sauna in full dress uniform – only to end up shaking hands with a line of sweaty, smiling and naked Swedish sailors.


Like all facilities, the saunas are used by both men and women, and the Swedish military does not segregate living quarters or bathrooms.

The obama regime’s repeal of Don’t Ask Don’t Tell (DADT) will introduce some form of cultural change. No one can say with any accuracy how much, but since all change is difficult in military culture – it can be safely expected that this change will be hard (and to others — soft) as well.

But like any challenge, opportunity exists, and it should be noted that DADT repeal is not the only cultural change being introduced to the military these days. There is now a strategic focus on developing broader cultural understanding among our soldiers, sailers, and airmen. This process essentially involves preparing our service folks to manage situations where human interaction falls outside an existing cultural norm.

Something tells me the Admiral in the story above may have felt uncomfortable being in that situation, and yet something also tells me that Admiral was able to adapt to the cultural differences that exist in the human interaction described. Given the Carlskrona is acting as the EU Flagship fighting pirates, it is not unreasonable to assume that one day LT Jane American will be serving on that vessel. To improve relations and become accepted among her culturally different shipmates, she could very well end up being one of those sailors standing naked in line shaking hands with Admirals outside the sauna. 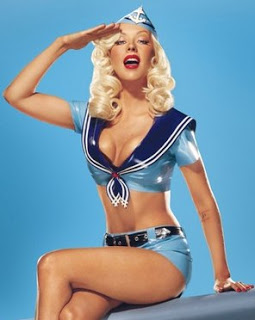 As a retired officer in the US Navy, I can see management and discipline problems that would come from having women and men sharing saunas onboard ships at sea for a long time.
I know that some of you are whispering (sexist, elitist officer) and you’d be right, because in my opinion, in the interest of protecting the fairer heterosexual women, they would need to be quartered in the air conditioned splendor of ‘officer’s country’. Lesbian women and homosexual men could be quartered – well, wherever.
Yes, I am suggesting that there be an officer’s sauna and an enlisted sauna – in the interest of protection only. After all, officers are gentlemen by act of Congress… and there would be acts of congress being upheld onboard ship. For the sake of the wives behind, the doctrine of DADT would also apply to those wives an husbands shore-side and their deployed spouses.
War is hell.