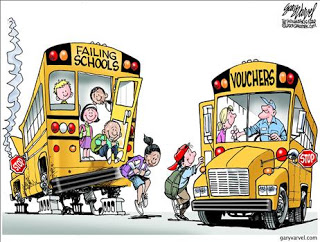 Facebook
Twitter
Pinterest
WhatsApp
Getting Secretary DeVos through the US Senate’s confirmation process and into her present position as Secretary of Education was a grind. The teachers unions pay politicians a lot of money to get their way and DeVos was not their pick.

America has found itself in a situation where big Washington DC interests such as education money (not particularly education) matters. Sec. DeVos has repeatedly stressed that education policy is better made at the state and local level, which, if she sticks to her word, should allay any rational concern that we will see expansive federal overreach into education. Candidate Trump stressed that education was a state and local matter and that block grants need to be made to states rather than dictating policy from the Washington Beltway.

(OC Register) The hyperpoliticized teachers unions can’t resist appealing to manufactured fear over DeVos to advance their own agenda. The California Teachers Association and California Federation of Teachers, for example, are asking Californians to take a pledge in support of “the public education all California’s students deserve.” According to the unions, attaining public education that students deserve requires one to support sanctuary cities and the belief that “social justice for all begins with a quality, free public education,” whatever that means.

Whatever education is, it isn’t free. Taxpayers pump billions into education and the unions want to insure that it’s spent in a way that benefits THEM. If the kids win too, that’s nice, but it’s by no means the priority. Living in California, there is a multi-billion dollar bond measure for education every two years to “bring schools up to acceptable standards”. In addition to that, counties raise money earmarked for education with increased sales tax. And yet less than half of California students met statewide reading and math standards last year, with just 48 percent meeting or exceeding reading standards and only 37 percent doing the same in mathematics. Minority and low-income students fare even worse.

When my children were in high school I taught a voluntary course at night on the subject of American history. The kids didn’t get the education during the day and it was offered. I was not paid. There was standing room only after the first two or three classes and the word got out. Imagine that. High school students showing up at 7 pm to take a history class without being forced to attend. When my daughter graduated from university and became a teacher herself, I showed up as a guest instructor. I don’t have a problem doing any of that. It’s a privilege. HOWEVER, why was it necessary?

In an environment of continually bloated and growing school budgets, massive teacher pension obligations and bond fund after bond fund – one would think that the education would be first rate. But it’s not. Teachers unions cower in fear with the prospect of a focus on accountability, competition and choice in education. Parents want the best for their children and that’s what they deserve.

Over the next four years, the strident teachers union, no doubt accompanied by hired thugs, will try to shout down choice. But if one is interested in social justice, what’s wrong with offering choice to everyone? 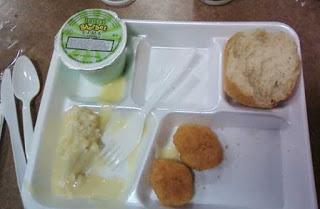 School Lunch – I am a proponent of quality school lunches. If the taxpayers wear that yoke, it’s ok by me. (see, my leftist tendencies are peeking out). The current school lunches are not something that you or I would eat. There is a solution. Hire parents who want the work to prepare and present school lunch to students. Handle the lunch issue locally. Parents overseeing quality would add a different paradigm.

That seems disarmingly simple, but it’s not because the parents aren’t part of the union. Union rules require a professional, career, pensioned person paid at least triple what you could hire a parent for.

Maybe the school lunch disaster will be fixed by President Trump, Sec. DeVos and a new look at education too?