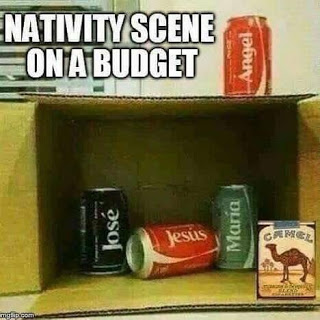 
Sometimes funds are tight, times are hard, but you still want to get into the Christmas spirit.

The Donkeys are scrambling for a champion. Devil Patrick, newly minted entrant into the circus hosted an event and then canceled it when only two people showed up. He is said by his party to be the “New Obama,” possibly because he’s black. Obama was only half black and his dad was essentially a sperm donor, but it may be racist to mention that.
Bloomberg wasn’t invited to the Democrat debate, and neither was Devil. What’s going on? They invited Spartacus, polling at >1%. I think that they need to be the “big tent” that they tell everyone that they are and get them all up there on the stage. Meanwhile the Buttguy seems to be surging in Iowa. I have no idea what his appeal is. Maybe it’s because he’s white, but mentioning that may be racist. Harris is polling at #5 in California but she still made it to the debate. Maybe that’s because she’s an Indian and female, but it may be racist to discuss that. I liked Marianne Williamson not because she’s a witch, but because she’s entertaining. But the Donkey’s shut her down, which is sexist.
Bernie and Liz, the two communists, seem to lack a certain luster to the rich East Coast elites, who are waking up to the fact that the commies are proposing to tax them at 115%. Thus, Bloomberg, the “new Trump” and his appeal to people who are not living in fly-over country.