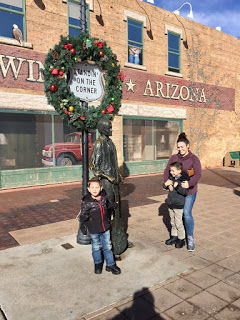 There isn’t much in the way of tourist traps in the White Wolf Mine area. Yes, of course, there is Sedona, which is beautiful in its setting, but it’s a lode stone for the weird and wanna-be weird. A lot of celebrities have summer/winter fifth homes in Sedona because it’s that sort of place. It’s not a high crime area. The police deliver ice to parties. I’m not knocking it. I rejected living there because of the price and then I spent more on the hovel than I would have on equal square footage in Sedona.

Most of what you find in tourist stores in Sedona is crystals to heal your various ills, aroma therapy, and palmistry. Almost every cult in the world has an “education center” in or near Sedona. They will tell you that there is a mystic power to the red rocks, beyond just being red rocks. “It’s the vortexes,” one prosperous merchant told me. It brought space aliens here anciently and it brings people here today (to buy t-shirts). 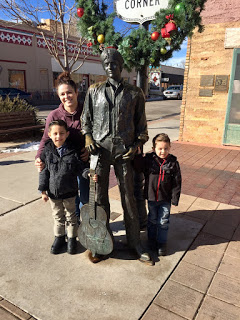 But wait, an alternative exists! You can stand on the corner in Winslow, Arizona. (Such a fine sight to see) My daughter Heather, who shares my love for the Eagles’ music wanted to stand on that very corner made legend by the song, “Take it Easy”.

And when you’re at the tourist destination, people want to buy stuff that they will throw away – the miracle of merchandizing-to-landfill.

Is there anything else to do in Winslow? No. Unless you want to go an auto parts store. There are quite a few of those. There’s also a state prison where the population (I’m told) is about 90% feather (as opposed to red dot) Indians. Other than that, jump on I-40 and head east to the crater where they will charge you $35 to look at a big hole in the ground. At the crater, they will sell you stuff to take home and throw away too.

Nobody merchandises landfill the way that Disney does. But there isn’t a Disney Adventure Park anywhere close.

If you go west from Winslow on I-40, there is Bearizona. You can buy stuffed teddy bears there to remind you of your time driving through a field with a few pines a lot of bears in it.

The Value of Celery Juice 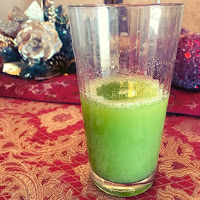 My daughters are all drinking celery juice. I suspect that it’s the latest fad. The claim made by “health experts” is that it cures just about everything, and you’ll live forever. I tried to convince them that blending raw turkey livers and adding that to their witch’s would enhance the experience, but they’re too clever to fall for that at this point in their lives.

I like celery. The juice isn’t that bad, but my reaction to the action of the juice is not happy in the least. So until the girls start eating a pound of ground up raw turkey liver mixed into their celery juice, I won’t be taking part in this miracle of blending.

The police rarely catch the smart ones.

(LINK) A Florida man says three syringes removed from his rectum during a jail strip search aren’t his, according to an arrest report.

Scott told law enforcement officers he had nothing on him when they searched him in the field.

When he arrived at the jail, however, that is when he removed the syringes and told officials they were not his.

Maybe he was just keeping them safe for a friend. That’s friendship…