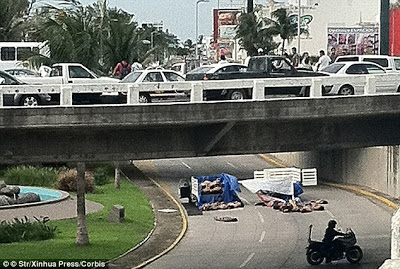 Suspected drug traffickers drove two trucks to a main highway in Veracruz and dumped 35 dead bodies during rush hour while gunmen stood guard and pointed their weapons at frightened motorists.

_ May 13: Mutilated bodies of 49 people dumped on highway in northern Mexico.

_ May 5: Bodies of 23 people found hanging from bridge or decapitated and dumped near city hall in border city of Nuevo Laredo.

_ April 17: Mutilated bodies of 14 men left in minivan in downtown Nuevo Laredo, along with message from undisclosed drug gang.

_ April 12: Tortured and bound bodies of seven men dumped in Pacific port city of Lazaro Cardenas along with messages signed by allies of Sinaloa drug cartel.

_ March 15: State lawmaker’s body identified as one of 330 corpses found since April in mass graves in northern state of Durango.

Sometimes the mass body dumps don’t register in the press in the USA. This is not to say it’s all of the mass killings or body dumpings in public. These are merely the only incidents to (a) make the press in Mexico and (b) be dumped in a relatively public place.

There are many other onsies and twosies left by the roadside as well as the yet undiscovered mass graves where the narcos have the decency to bury the bodies of their victims.

A Mexico Vacation: The antidote for civilization…