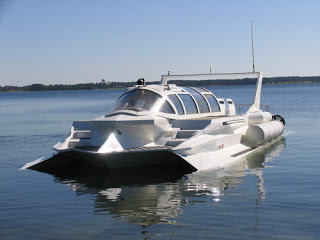 A friend of mine called me and said that I had to check out the Hyper-Sub.
The company characterizes the boat in this way:

As a speedboat, the Hyper-Sub deploys very easily and quickly from almost any dock or beach, and can travel long distances in most weather conditions while being able to do so without the aid of a transport or support vessel. This allows the Hyper-Sub to operate at only a fraction of the cost of other systems that are capable of accessing the sub-sea environment.

As a true submarine, a Hyper-Sub can dive repeatedly when deployed given its ability to recharge its batteries and dive air unlike its smaller submersible counter parts. It provides protection for its crew from changes in pressure when it dives and protects its crew from the environment. As a result, the Hyper-Sub can remain deployed for many days while either on the surface, submerged, or in any combination of the two.

I don’t know that the platform represents the “future of Naval Special Warfare”, but the technology has some serious potential.