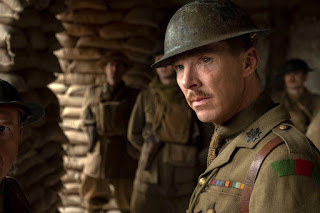 Facebook
Twitter
Pinterest
WhatsApp
During World War I, two British soldiers — Lance Cpl. Schofield and Lance Cpl. Blake — receive seemingly impossible orders.
In a race against time, they must cross over into enemy territory to deliver a message that could potentially save 1,600 of their fellow comrades — including Blake’s own brother.
________

The War-to-end-all-Wars has been going on for three years. One year previously, in July-November 1916, there were one million casualties at the Battle of the Somme. The British lost 57,000 on the first day of the offensive.
Total Casualties topped 1 million, including the deaths of more than 300,000. British troops sustained 420,000 casualties—including 125,000 deaths—during the Battle of the Somme. The casualties also included 200,000 French troops and 500,000 German soldiers.
And in 1917, that is history, as the war continues to drag on. The original British Expeditionary Force (BEF) of six divisions and the Cavalry Division, had lost most of the army’s pre-war regular soldiers in the battles of 1914 and 1915. In 1917, the bulk of the army was made up of volunteers of the Territorial Force and Lord Kitchener‘s New Army. Rapid expansion created many vacancies for senior commands and specialist functions, which led to many appointments of retired officers and inexperienced newcomers. Staggering losses by the French at Verdun and by the British, who tried to relieve pressure on the French during the Somme offensive meant that by 1917, things were very thin.
During trench warfare, the trenches changed hands as they were captured by bayonet charges through wire into machine gun fire and carefully ranged modern artillery. In some cases, corpses of the dead were fifty feed deep, encased in mud.
The uniforms, and militaria of the movie were spot on. I could not have wanted for better. The back story could have been expanded on and possibly ten or fifteen minutes toward (but not at) the end might have been cut. But that’s me being picky.
I think that it’s a movie worth seeing. (more clips)

You can’t tell the story of World War One because you can’t put the smell in the movie. But you can try and tell a version of the story.