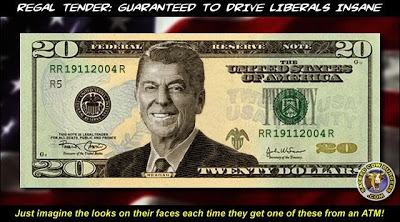 Facebook
Twitter
Pinterest
WhatsApp
Apparently progressives are pushing for an end to Andrew Jackson’s face appearing on the Twenty-Dollar Bill. (read here)
I’m not a fan of Andrew Jackson as presidents go, but I take it in a different direction than the New York Times did in the article referenced and a different direction than the liberal elite in America. They want the face of an Indian or an African on the banknote.
I think that Ronald Reagan’s face should be on the US $20.
It was Reagan who put America back on a sound financial footing after the disastrous Carter years. It was Reagan whose leadership ended the Cold War, etc.